Skip to the content
At some point yesterday Chocolate Chip-Gate began on Facebook. Word got out that Trader Joe’s popular kosher chocolate chips were being re-designated as “kosher dairy” rather than “kosher pareve”. Immediately, words like “tragic” and “devastating” were being used to describe the change. Facebook users were recounting their urgent visits to local Trader Joe’s locations to grab up the pareve (non-dairy) chocolate chips from the shelf in a way that brought back memories of Coca-Cola fans in the 1980s stockpiling cans of Coke when New Coke came out. 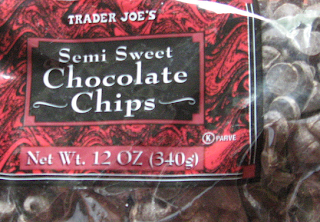 Kosher consumers appreciate the pareve designation on chocolate chips because it allows for the substitution of non-dairy chocolate chips in baking for desserts following a meat meal, which is customary among most kosher-observant carnivores for Shabbat dinner.

As soon as the news that Trader Joe’s would substitute the OK pareve hekhsher (kosher certification symbol) for a dairy one, discussion threads were launched on Facebook describing how favorite recipes for trail mix and chocolate chip challah would be an impossibility without the pareve chocolate chips from Trader Joe’s. An online petition was started to urge Trader Joe’s to reverse the decision.

There was also a lot of misinformation about the change. Dani Klein of the YeahThatsKosher blog posted a private Direct Message from Twitter that he received back from the OK Kosher Certification agency stating that the chocolate chips will not contain dairy, but will be labeled as such. There were also discussions that the new designation would actually be “DE” for dairy equipment, a relatively new kosher status that means the product is not dairy but the equipment could be used for dairy products. The Dairy Equipment designation means that food products with that status cannot be eaten with a meat meal, but can be eaten following that meal.

The news that it would be a dairy equipment hekhsher and not a bona fide dairy label resulted in several discussions on Facebook about that designation, how food labeled with the DE should be treated, and what the ramifications of a DE label are for dairy allergic individuals who rely on a pareve hekhsher for health reasons. Were people reacting too quickly? Was Trader Joe’s even changing the production process of the chocolate chips?

Today, Dani Klein actually contacted the OK Kosher Certification Agency today and got to the bottom of this story. He was told that the chocolate chip product itself is not dairy, but the product is bagged at the end of the assembly line and neither Trader Joe’s or the OK Kosher Certification Agency can guarantee that dairy chocolate chips don’t also mix into the bag. This means that a bag of Trader Joe’s pareve chocolate chips may or may not have some dairy chips mixed into a bag. That is why the OK is taking the position that these bags of chocolate chips should bear the OK-D certification as if they were dairy. Further, Klein was told by OK officials that the response he received via Twitter was an error and should have been redacted.

So, the bottom line is that the chocolate chips probably should have been labeled as “dairy” all along because they couldn’t guarantee no dairy chips were mixed in by accident (although if it’s less than 1/60th of the total volume of the bag it would still be pareve based on the principle of batel b’shishim).

There are other pareve chocolate chips available on the market, but Chocolate Chip-Gate demonstrates just how much Trader Joe’s fans have come to rely on the market’s specialty products.

While I am involved in the kosher certification industry through Kosher Michigan, this blog does not seek to set forth any kosher guidelines. Individuals should consult with their local rabbinic authority as to how they will treat Trader Joe’s kosher chocolate chips in the future.