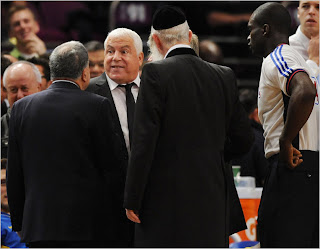 Sunday the rabbi ran on the court.

No, this is not the title of a new book in the Harry Kemelman series about the detective rabbi.

Last Sunday, during the pre-season exhibition game between the New York Knicks and Maccabi Electra Tel Aviv, Maccabi Coach Pini Gershon was ejected from the game but refused to leave the court at Madison Square Garden.

I’m sure the NBA had some concerns about the substitute officials who have taken over during the referee lockout. But they were probably not expecting a situation like this to take place. 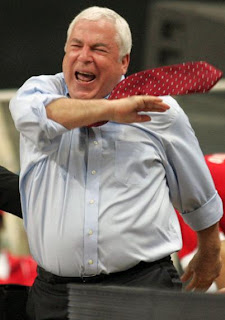 Like most of these pre-season exhibition games with foreign teams, the Israeli team did not prove to be much competition for the NBA pros. The Knicks did not seem to have much difficulty on their way to their 106-91 win in Madison Square Garden. Maccabi’s Coach Gershon seemed to be irked by the referees all game. Ironically, what sent Gershon over the edge was actually a foul on New York. When the Knicks’ Al Harrington was whistled for an offensive charge, Gershon complained to the refs. He was likely upset that Harrington argued the call but didn’t draw a technical.

The referee didn’t much care for Gershon’s attitude and awarded him his second technical foul of the night. The officials had no choice but to follow NBA league rules and eject the coach from the court following his second tech.

And that’s when the rabbinic intervention occurred.

According to the JTA report:

[Coach] Pini Gershon delayed play in Madison Square Garden for 10 minutes Sunday after he would not exit following his second technical foul in the third quarter.

Security officials from the NBA and Madison Square Garden tried to lead Gershon off the floor. Rabbi Yitchak Dovid Grossman of the youth village Migdal Ohr, which was benefiting from the night’s proceeds, also tried to intercede, asking officials to let the coach stay.

Rabbi Grossman apparently tried to appeal to the NBA substitute referees’ sense of teshuvah (repentance). Several reports stated that he told the ref that if Coach Gershon is forgiven, it will be a wonderful example to the children in the crowd.

The NY Times article explains that the rabbi saw it as his duty to moderate. Not knowing that two technical fouls result in an automatic ejection, he attempted to persuade the referee to change his call and allow Gershon to stay.

“But he says that this is the law, that he must leave,” Grossman said, referring to the referee in broken English.

It was at that point that Gershon tried apologizing for his outburst, with Grossman behind him.

“This is not a regular game,” Grossman said he told the officials. “In a game for friendship, you forgive.”

Maccabi center Maciej Lampe, a 2003 Knicks draft pick tried to explain his coach’s behavior: “He’s a big person in European basketball, and he probably felt like he was being disrespected.”

Nevertheless, in the NBA, with all its Jewish team owners, Rabbi Grossman proved that not even a rabbi can keep a coach from hitting the showers early following a second technical foul.

The bizarre situation confused everyone, especially the Knicks’ Nate Robinson.

“I was over there just trying to figure out what was up,” said Robinson, who added that the coach and the rabbi “started speaking a different language… It threw me off. I needed a translator,” said the two time NBA slam dunk winner.