Skip to the content
When Hank Greenberg walked down the long aisle of Congregation Shaarey Zedek in Detroit on September 20, 1934 on Yom Kippur, he received a standing ovation. That day, the Detroit Tigers faced the New York Yankees in a key game late in the season. Despite the pennant race, Greenberg sat out the game and went to synagogue instead. The Tigers lost.

Greenberg had played ten days earlier on Rosh Hashanah leading the Tigers to victory with his two home runs, although in his autobiography he describes how he sat out batting practice to mull over the decision. A rabbi gave him the go-ahead leading the Detroit News to run the headline: “Talmud Clears Greenberg for Holiday Play.” 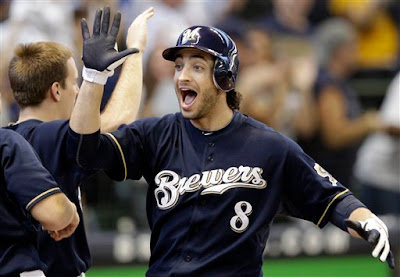 While the Milwaukee Brewers star player Ryan Braun is sometimes referred to as “The Hebrew Hammer” just like Greenberg was and he even lived in a house once inhabited by Hank Greenberg, Braun is going to play in today’s game against the Arizona Diamondbacks. Or to use the language of Larry David on “Curb Your Enthusiasm”: Ryan Braun will not Koufax his teammates today. The game starts at 4:00 PM Central Time, which theoretically would give him a couple hours of playing time before the commencement of Yom Kippur at sunset. However, that is a moot point because Braun was never a synagogue-going guy. His father is Jewish, but Braun wasn’t raised Jewish (his mother is Catholic).

When I was contacted by NY Times sports reporter Richard Sandomir yesterday on this matter, I explained that the real issue is why Jewish people are so infatuated with Jewish baseball players and Yom Kippur. Professional Jewish athletes in other sports play on Yom Kippur without any fanfare. There’s something inherent in major league baseball that makes this an issue.

Second, I explained that the authenticity of Braun’s Jewishness doesn’t seem to matter to many Jewish people who otherwise wouldn’t consider him Jewish. I agree with that. It shouldn’t matter if only Braun’s father is Jewish or if he wasn’t raised Jewish. What should matter is if Braun considers himself to be Jewish today. No one is saying that he should be counted in a synagogue minyan (prayer quorum), but there is no reason not to feel Jewish pride that the “Hebrew Hammer” has taken his team to the post-season and is a candidate for National League MVP (Braun was NL Rookie of the Year in 2007).

It comes down to the difference between Judaism as a culture and Judaism as a religion. From a religious viewpoint, Ryan Braun is not Jewish. From a cultural viewpoint, he should be considered a Jewish ballplayer, included in sets of Jewish baseball cards, and eligible for induction in the Jewish Baseball Hall of Fame.

Here is the article from today’s NY Times:

For Braun, Stadiums Remain His Temple
By Richard Sandomir

If a player with Jewish heritage reaches baseball’s postseason, the inevitable question is: will he play on Yom Kippur or go to synagogue? It is not a query on the level of the Four Questions that are asked during the Passover seder. But it is one of those curious baseball inquiries — maybe on par with, Does a rising fastball really rise? — that pop up sometimes.

Why such interest in whether a ballplayer plays a game or worships on a High Holy Day? Call it the Greenberg-Koufax Yom Kippur Precedent: In 1934, Hank Greenberg went to temple rather than play a game against the Yankees during a pennant race. In 1965, Sandy Koufax declined to pitch Game 1 of the World Series out of respect for his religion.

They are still heroes to their faith. The Los Angeles Dodgers’ Shawn Green sat out a critical game in 2001 to observe Yom Kippur.

This year, the question has been put to Ryan Braun of the Milwaukee Brewers, who play the Arizona Diamondbacks on Friday afternoon in the decisive Game 5 of their National League division series. The game begins just after 4 p.m. Central, and Yom Kippur starts at sunset at 6:23 p.m. In theory, Braun could put in five or six innings, then scoot to temple.

During Rosh Hashana last week, Michael S. asked on Twitter, with some ire: “Why did Ryan Braun even play last night?!?! He better not play on Yom Kippur!”

Except that Braun is not religious. Although his father is Jewish, his mother is Catholic, so he is not a Jew according to religious law. Braun played on Rosh Hashana and will play Friday. Perhaps it should not be an issue, but it has become one in some quarters, particularly on the Internet.

“The Jewish community is always looking for Jewish baseball heroes,” said Rabbi Jason Miller of Farmington Hills, Mich., who blogs about Jews and sports. “Braun is not considered a Jewish player, yet Orthodox Jews would cite him as their Jewish hero.”

Ian Kinsler of the Texas Rangers also has a Catholic mother but celebrated Jewish and Christian holidays as a child, according to Sports Illustrated. If he felt qualms about playing Saturday, he need not fret. Game 1 of the A.L.C.S. between Texas and the Tigers will not begin until after Yom Kippur ends at sundown.

Anticipating what Braun and Kinsler would do, The Tablet, a Jewish publication, said on its Web site recently, “Millions of Jewish boys and their mothers are watching.”

Ron Kaplan, the sports and features editor of New Jersey Jewish News, said he gets requests from readers wondering if a player is Jewish or if he will play on Yom Kippur. One letter he received this week advocated that Kinsler sit out Yom Kippur.

Kaplan said that Jews are excited to see Jewish ballplayers because there are not many of them. “Jews are so underrepresented,” he said, “so whenever there’s somebody who has any tangential relationship to their religion, we claim them as our own.”