Tuesday the Rabbi Went Home. What is the title Sue Fishkoff chose for her article about Rabbi Joyce Newmark’s appearance on the TV game show “Jeopardy!” last week? (“That is correct,” says Alex Trebek.)

I too was going to riff on the titles of Harry Kemelman‘s famous book series about Rabbi David Small when I first blogged about Rabbi Newmark competing on Jeopardy.

My original title for the article I submitted to JTA.org was “Monday the Rabbi Appeared on Jeopardy,” however, after it was confirmed that Rabbi Newmark won that night, the title was changed to riff on the format of Jeopardy’s trivia questions: “What is won ‘Jeopardy!’ (What did the rabbi do on Monday?).”

In fact, I had already Photoshopped artwork to accompany the article in case I didn’t receive the official photo from Jeopardy Productions in time for the article to be published. Here it is: 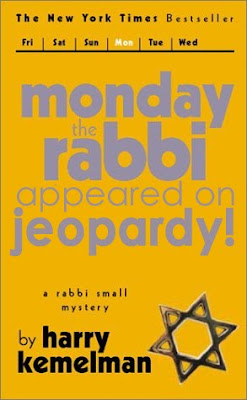