Skip to the content
Professor Arnold Eisen, a scholar of American Judaism and the chancellor of the Jewish Theological Seminary, proclaimed, “Nothing I do to build Jewish life, Jewish education, or the Jewish community is more important than getting more kids to Jewish camps.”

Those are strong words from the ivory tower and quite the endorsement of Jewish summer camp. But Eisen wasn’t the only head of a major Jewish academic institution who lauded Jewish summer camping at the Foundation for Jewish Camp’s recent Leaders Assembly. He shared the stage with Richard Joel and Rabbi David Ellenson, the presidents of the Orthodox and Reform academies respectively, who both agreed that the answer to Jewish continuity can be found at summer camp. 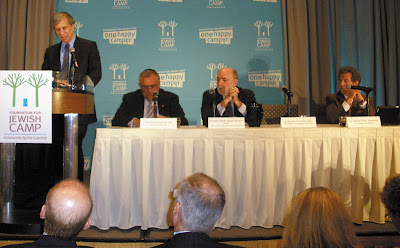 All three academicians extolled the virtues of the summer camp experience for young Jewish children who seamlessly go from overnight hiking and canoe trips to Friday evening Shabbat services by the lake. The leaders of Yeshiva University, the Jewish Theological Seminary, and Hebrew Union College took turns standing in front of 400 Jewish camping leaders at the FJC gathering – from camp directors to donors – to explain how their denomination would help to grow the Jewish camping phenomenon in the coming years. These schools train Jewish educators – most of whom discovered or strengthened their Jewish identity at summer camp – and with a $45 million investment from the Jim Joseph Foundation (divided among the three institutions) they will be able to prepare more young people who wish to work in the informal Jewish educational field of Jewish camping.

With over $90 million of philanthropic contributions coming through the FJC since its founding 13 years ago to benefit Jewish camping, it is clear that this is where donors are investing the most capital in what has become known as “Jewish continuity.”

Approximately 72,000 Jewish children currently attend a Jewish summer camp. The statistics show that the Jewish summer camp experience has a tremendous effect on children and their Jewish identity. A recent study by the renowned sociologist Steven M. Cohen commissioned by the FJC shows that Jewish campers grow up to be connected to Jewish life and identify proudly within the Jewish community as adults. “The analysis indicates that they bring, first of all, an increased inclination to practice Jewish behaviors in their lives, from Shabbat candle lighting to using Jewish websites, and to appreciate the value of Jewish charity,” Cohen concludes in the study. “Secondly, they bring an increased inclination to value and seek out the experience of Jewish community, whether in the immediate sense of joining other Jews in prayer or in the more abstract sense of identifying with fellow Jews in Israel.”

Most Jewish summer camps are nonprofits and, historically, have not been able to compete with the lavish facilities and stellar sports programs at the privately owned for-profit camps. But that is changing. Over the past decade the hottest cause for major philanthropists in the Jewish community has been funding the growth of Jewish summer camps, which means seeding new camps and ensuring there are ample need-based scholarships to afford all young Jewish children the ability to experience the magic of camp.

Camp leaders have long recognized that a main reason more young people don’t make Jewish camping part of their annual summer experience has been because they choose to focus on one interest like drama or a particular sport and seek out camps that specialize in those activities. FJC has put its attention into funding such specialty camps that concentrate on one main interest category but also infuse the Jewish magic for which Jewish camps have been known. FJC was able to open five new camps in 2010 as a result of the first Specialty Camps Incubator – based on a business incubator model – and now the second wave of that program has been launched resulting from the $8.6 million investment by the AVI CHAI Foundation together with the Jim Joseph Foundation.

There seems to be something inherently Jewish about summer camp. Indeed, when Jewish adults gather the conversation inevitably turns to Jewish camp memories filled with nostalgia. When two adult Jews meet for the first time, the game of “Jewish Geography” ensues and “Which camp did you go to?” and “Did you know so-and-so who went to that camp?” are the unavoidable questions.

As Eisen has written about Jewish summer camp, “For once in these kids’ lives, Jewishness is not something they are or do off to the side of life, in Hebrew school or synagogue. It is not a subject for debate but simply there, taken for granted, a part of what happens 24/7.”

No matter what the activity – from baseball and boating to crafts and campfires – the social aspects of Jewish camp all play out in a constant Jewish milieu. The benefits of those summer experiences are reaped over the course of a lifetime for the Jewish individual, and in turn for the Jewish community as well. Spring is upon us and we are now focused on Passover, but thousands of young Jewish children are already counting the days until school vacation and their own exodus to the freedom of another memorable summer at Jewish camp.