The Chicago Bears top draft pick is Gabe Carimi, a 22-year-old from the University of Wisconsin. The 6-7, 314-pound All-American is nicknamed “The Jewish Hammer.”

I’ve written on this blog several times about Jewish Major League Baseball players and the conflict of playing on Yom Kippur, but I’ve never discussed how the Yom Kippur decision affects NFL football players. This is likely because when there’s a Yom Kippur conflict in pro baseball it is often an important post-season game, yet, in college and pro football it’s only the beginning of the season. 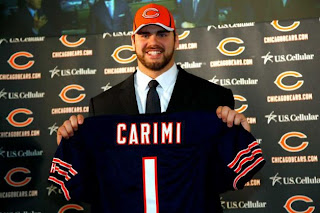 Gabe Carimi, however, has brought the Yom Kippur holiday conflict to the NFL when he responded to a question about whether he’d play on Yom Kippur in a Chicago Bears game.  A self-proclaimed Reform Jew, Carimi fasted until an hour before the Big Ten opener in his freshman season for the University of Wisonsin when the game fell on Yom Kippur. When Yom Kippur again fell on a game day last season, Carimi fasted for 24 hours, but not according to the time zone he was currently in. Rather, he fasted according to the Israeli sundown so he could eat and take intravenous fluids right before game time.

Gabe Carimi was quoted as saying, “It’s pretty big in my life. I’m religious, but I try to tweak it so I can still do my job.”

At the NFL Combine this year, when asked whether he would play on Yom Kippur, Carimi told NFL scouts, “I already looked out over the next 15 years, and Yom Kippur doesn’t fall on a Sunday.”

So, Gabe Carimi doesn’t have to worry about any NFL games that are scheduled for Sunday conflicting with Yom Kippur. Ever. And had he kept looking beyond the next 15 years, he would find that there are no Sundays on which Yom Kippur falls.

What Carimi neglected to look for are Yom Kippur conflicts on other days of the week since there are the occasional NFL games on Monday nights, Thursday nights, and Saturdays when Yom Kippur can occur.