Skip to the content
In this week’s Torah portion called Vaera, the Lord speaks to Moses, saying, “Go and tell Pharaoh King of Egypt to let the Israelites depart from his land.” However, Moses protests. He raises doubts that the people will listen to him. He uses a kal vachomer – the hermeneutical device often used by the rabbis in midrashic literature. Applying the outcome from a minor case to a major case, the formula is “If X, then all the more so Y.” Moses says to God, “The Israelites [my own people] would not listen to me; how then should Pharaoh heed me, a man of impeded speech?” If his own people will not listen to him because of an inability to speak well, then how can God expect Pharaoh to listen to Moses’ demands?

This is not the first time that Moses appeals to God using his speech impediment as an excuse. In last week’s parsha, Moses claims Lo ish d’varim anokhi – “Please, O Lord, I have never been a man of words, either in times past or now that You have spoken to Your servant.” Ki khvad peh u’khvad lashon anokhi – “I am slow of speech and slow of tongue.”

God negotiates with Moses finally offering his brother Aaron as Moses’ mouthpiece to convey the message to the people. Yet Moses remains the central guiding figure standing at the helm of the Israelite nation. One not familiar with the rest of the Biblical Narrative might presume that Moses’ incompetence in public speaking would immediately disqualify him for the role of leader of the Israelites. Thus, regardless of how we understand Moses’ speech impediment or its negative effect on his self-confidence, we should consider the fact that the Jewish people’s leader par excellence was not an effective speaker. And it did not matter.

Moses says, “I am not a man of words.” So, how is he such a successful leader? He is a man of action. Moses says, “I am slow of speech.” What does he mean by this? He is a man of justice. He might have physical disabilities or limitations precluding him from eloquently conveying a message, but it does not deter him from demonstrating strong and charismatic leadership abilities in other ways. What Moses lacks in oratorical skill, he makes up for in his action, and in his pursuit of justice. 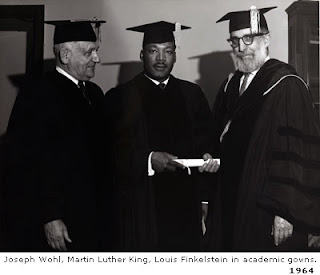 This past week our nation commemorated the life of Dr. Martin Luther King, Jr. on the anniversary of his birthday. Dr. King was one of humanity’s greatest orators. He could steer an audience’s emotions with his booming voice, with his carefully crafted words, with his memorable sound bites. And yet, it was his acts of social justice that ultimately made him the great leader that he was. Many of us have seen the famous photographs of Dr. King walking arm-in-arm with Rabbi Abraham Joshua Heschel at the march in Selma Alabama. Heschel famously commented that on that day, he was “praying with his feet.”

Equally moving was the time King and Heschel, two modern masters of words, walked together in silence to Arlington’s Tomb of the Unknown Soldier in protest of the war in Vietnam. They laid a wreath in pledge to lo yilmedu od milchama – that humankind would “no longer know war.” They certainly could have movingly expressed their feelings with words, but it was more powerful to resort to action. They let their actions do the speaking.

We should be curious as to why God does not perform a miracle and correct Moses’ speech impediment. After all, this is a God who only moments later causes miraculous plagues to triumph the Egyptians and opens the sea for our ancestors to cross. The answer must be that actions speak louder than words. Moses leads by example. He leads by doing.

This should become a powerful message of American Judaism. We have the moral imperative to strengthen our social action initiatives. We must apply Jewish ethics to contemporary issues pursuing social justice. From the words in our Tradition, tzedek tzedek tirdof (only justice shall you pursue), we must make it our ethical responsibility to make social action one of our highest priorities. Rabbi Shammai teaches in Pirkei Avot, “Say Little Do Much.” Not everyone is a great speaker. But that should not be a hindrance. Be a “doer.” You can change the world.