Skip to the content
Cross-posted to the Community Next blog

Is Drew Barrymore Jewish? The answer is that she currently is not, but she appears to be interested in converting to the Jewish faith. She is engaged to marry Will Kopelman this year.

While many non-Jews preparing for conversion to Judaism reach out to rabbis or Jewish friends for guidance, Drew Barrymore has sought out a colleague who has been an Israeli hair stylist, a water boy, a hockey player/golfer, and a surrogate father. Yep, Adam Sandler is reportedly offering guidance to Barrymore during the transition to the Jewish people.

Perhaps Drew Barrymore will hear her name in the next version of Adam Sandler’s Hanukkah Song, which would be the fourth installment in Sandler’s humorous song that lists Hollywood’s Jews who celebrate Hanukkah. 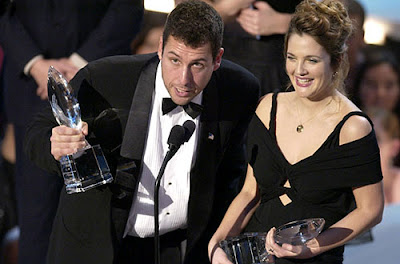 The celebrity gossip magazine In Touch Weekly reported that Sandler might even play a major role at Drew Barrymore’s wedding:

According to insiders, Drew Barrymore wants her favorite co-star Adam Sandler to be her best man when she marries fiancé Will Kopelman in a traditional Jewish ceremony later this year.

In fact, Adam and 36-year-old Drew have grown so close while working on several movies together that “he’s even helping her with the process of converting to Judaism,” a source tells In Touch.

“Those two absolutely adore each other, so it only made sense to Drew that he will be right by her side playing an important role at her wedding.”

Although her rep denies the story, Drew, who has gotten very close to Will’s family, has told them she will raise their children Jewish, says the friend.

Unlike her experience with Adam Sandler, Drew Barrymore probably didn’t have to go through 50 First Dates before becoming engaged to Kopelman. But there is a good chance that her best man will also be the Wedding Singer on her big day!

For now, she’ll likely be studying in anticipation of her conversion. When Drew Barrymore makes it official and converts to Judaism, coming up with fun headlines will not be a challenge. “Barrymore Becomes Drewish” or “Drew A Jew” are two of my favorites.