He then had a flashback to his bar mitzvah in 1999 when both sides of his family met for the very first time. Wearing a big white kippah (yarmulke), Drizzy gave his bar mitzvah speech in which he sang a rap to the tune of Hava Nagila. Yes there were quite a few stereotypes about both Jews and African Americans, like when his Jewish uncle gave him a check for $18 (chai) and his Black uncle gave him a check for a $1,000 but told him to wait 90 days to cash it, but these were all in jest and it’s Saturday Night Live after all. 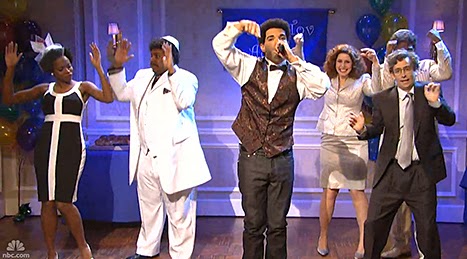 This was also the first appearance of SNL’s newest cast member Sasheer Zamata, who was hired after Lorne Michaels, the show’s creator and producer, took a lot of flak for the lack of African American women on the show.
Watch below as he raps about this wonderful blend of cultures: “Chillin’ in Boca Raton with my mensch Lenny Kravitz / The only purple drink we sip is purple Manischewitz.”

I’m not sure if Drake’s appearance on SNL had a positive effect on Black-Jewish relations, but it was certainly a funny skit that shouldn’t offend anyone. Plus, it was great seeing Drake speak so openly about his Jewish upbringing and bar mitzvah in a way that even my kids can watch. As I wrote about on this blog, Drake’s “HYFR” music video shows Drake wearing a tallit and drinking Manischewitz, as well as saying L’chayim as a young boy at a friend’s bar mitzvah. The “HYFR” video is too explicit for my children to watch (and too explicit for this blog), but it is available on YouTube by searching for “Drake” and “Bar Mitzvah”.