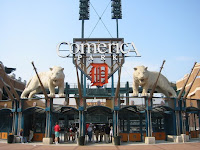 The Detroit Tigers’ 2009 home opener is this Friday afternoon at 1:05 p.m. I would get tickets and attend if it weren’t the second day of Passover. According to T.S. O’Connell, sports historian and the editor of the Sports Collectors Digest, Jews shouldn’t be the only religious group upset with the date of the Tigers’ home opener this year. On his blog, The Infield Dirt, O’Connell writes:

I saw a news item recently that said the Detroit Tigers were taking a bit of heat because of the scheduling of their home opener on April 10, more precisely noting that some Catholics were upset that the 1:05 p.m. start time came during the noon to 3 p.m. period when traditional Christian belief holds that Jesus was hung on the cross.

O’Connell then writes how this news item caused him to wonder how this particular conflict (opening day an Good Friday) hadn’t come up before. He waxes nostalgic about the 1965 decision by Sandy Koufax to forgo pitching in the World Series opener against the Minnesota Twins because it fell on Yom Kippur. He writes:

I was just a 15-year-old kid, frantically following the approaching World Series in the New York Daily News, and I was just awestruck that somebody (actually my favorite pitcher) could take a pass on what I regarded as a secular assignment with near-religious overtones. Mostly it just impressed me with the seriousness of the Jewish faith; the decision only enhanced my view of Koufax, aided neatly by the later developments that saw the Dodgers win in seven games. By my way of thinking, it was no harm, no foul. I also found it fascinating to learn years later as I became something of an amateur baseball historian that there was never really any major decision involved for Sandy. He had long since made it clear to the Dodgers’ brass that he would not play on Yom Kippur, so when the prohibition coincided with one of the holiest days in the baseball world, it was what we would later call a “no brainer.” That same thirst for reading about baseball history would lead me to Hank Greenberg’s decision to skip a game during the 1934 pennant race for the same reason.

What a statement it would make if Mike Ilitch, owner of the Detroit Tigers, told the commissioner of baseball that the Tigers would have to reschedule their opening day game at Comerica Park because of Good Friday and Passover. Of course, with my luck, they’d reschedule the game to Shabbat and I still wouldn’t be able to go!

On the same subject, I laughed when I read an email circulating about the Boston Red Sox home opener this year. Here it is:

The Red Sox home opener this year will be postponed for Passover.

Red Sox general manager, Theo Epstein announced that the Boston Red Sox home opener will be postponed to April 14 to avoid the eight days of the Passover holiday. He noted, because three of his starters (Kevin Youkilis, Gabe Kapler and Adam Stern) are Jewish as are his box seat holders, he was forced to make this change in scheduling. There have been several complaints from fans, who are enraged at Epstein’s decision. In fact, protests are being tendered to the commissioner of baseball’s office. However, Bud Selig, commissioner of baseball, will not be able to address these protests; mainly due to a scheduling problem. This has been caused by the family seders he and Mrs. Selig will be attending.

Also, unable to attend the opener: Al Gore and Tipper will be unavailable as they will attend a seder at their son in law’s home. Bill and Hilary Clinton will be attending the seder at the home of their daughter Chelsea’s boyfriend. In addition, former mayor of NYC, Rudy Guiliani, whose wife will be busy preparing their seder. And finally the Obamas will be out of town enjoying a seder at Michele’s cousin’s house, Rabbi Capers Funnye.