The student-run journal New Voices has published some thought-provoking and quite provocative articles in recent issues. Their current issue takes on a theme I don’t think has been discussed much. Is it acceptable for rabbinical students to intermarry? This is certainly not an issue in the Orthodox world and I don’t remember it ever really being discussed at JTS (Conservative). However, in the more liberal rabbinical schools (namely the Reform’s Hebrew Union College, the Reconstructionist Rabbinical College, and the new non-denominational Hebrew College), I guess this has been an issue.

One of my classmates at JTS was dating a non-Jewish woman, but she converted to Judaism early on in our six-year course of study and it was a non-issue. 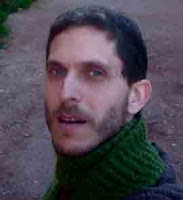 The New Voices article, “The Coming of the Intermarried Rabbi”, by Jeremy Gillick opens with the story of David Curiel (right), who decided to become a rabbi in the summer of 2008. Curiel was shocked when Hebrew College told him he would not be welcome at its seminary because his wife was not Jewish. In the “it’s a small world” category, Curiel is from Metro Detroit and is the brother of a Hebrew High School classmate of mine from Adat Shalom Synagogue.

The author explains that the “Conservative movement’s Jewish Theological Seminary (JTS), the Reform movement’s Hebrew Union College (HUC) and the Reconstructionist Rabbinical College (RRC) all refuse to admit or ordain students in relationships with non-Jews”.

The policy at the Reform Movement’s seminaries reads: “Because we believe in the importance of Jewish family modeling, applicants who are married to or in committed relationships with non-Jews will not be considered for acceptance to this program”.

Rabbi Dan Ehrenkrantz, dean of the Reconstructionist Rabbinical College in Philly said “The bedrock of what it means to be Jewish is to belong to the Jewish people. Leaders of the Jewish community, who model to others what Jewish life can be, should themselves be in homes that are fully Jewish”.

There are some intermarried rabbis out there. “In 1992, Rabbi Zalman Schachter-Shalomi, a founder of the neo-Kabbalistic Jewish Renewal movement, ordained Tirzah Firestone, making her the first intermarried rabbi on record. In her memoir With Roots in Heaven: One Woman’s Passionate Journey into the Heart of Her Faith, Firestone recounts how her husband inspired her return to Judaism, but that their marriage ultimately fell apart because of his faith.”

According to Rabbi Marcia Prager, the dean of ordination programs at ALEPH (Renewal), Firestone’s experience informed the school’s approximately 10-year-old policy to evaluate students with non-Jewish partners on a case-by-case basis. When ALEPH does admit such students, it does so with the hope that the non-Jewish partner will one day “join the tribe”.

What do you think? Leave your comment about whether it is appropriate for rabbinical schools to refuse to admit intermarried candidates into their ordination program.