My list of the Best Jewish Apps of 2010 at The Jewish Week has generated a lot of attention. The list of thirty-three apps for the iPhone, iPad and Android phones has been reposted on several blogs around the Web. With over 300,000 apps available and over 7 billion downloads to date, there are quite a few Jewish apps to choose from. I separated the utilities from the novelties, and made sure to include the Jewish apps for the Android (full disclosure: I’m a Droid user).

My list includes Jewish texts and luachs (calendars), kosher restaurant databases and recipes, and a few kitschy but fun apps. Of course, after The Jewish Week published my picks I began receiving email messages from app developers around the country (and from down the street) complaining that I didn’t include their apps. Well, I couldn’t include all of them. 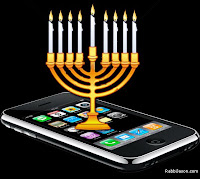 For Hanukkah alone there are dozens of apps that let users do everything from sing the blessings (Behrman House’s (iHanukkah) and light virtual menorah candles (iMenorah) to spin dreidels on the iPad (Captain Moustache’s Dreidel HD), catch jelly donuts (Catch the Sufgania), and learn the rules of the dreidel game (iDreidel).

As I wrote in the introduction to the list of the best Jewish apps, “As more Jewish people acquire the latest in handheld technology, there will be more Jewish-themed applications available for download. Some of these apps will be utilities for checking the Hebrew date or learning about the weekly Torah portion. Other apps will be novelties like making shofar sounds for Rosh HaShanah and grogger sounds on Purim. With many Jewish developers around the world, you can be certain there will be no dearth of Jewish apps in the coming year.”

Here’s the link to the list. And as aways, check out www.jewishiphonecommunity.org for a comprehensive listing of Jewish apps as they are released.