Spending a week in Israel earlier this month I kept my eyes open to the way Israelis use technology. Even on my first time in Israel over 18 years ago I noticed that Israelis thirsted for the latest tech gadgets. Being a country that struggled with telecommunications early on in its existence primed Israel for a telecom revolution. In the first decades of statehood, stories persisted about families who waited years just to get a telephone in their own home. So when mobile communications took off in the middle of the 1990s, Israelis were eager to adopt the new technology.

One thing I noticed during my recent visit was that the Apple iPhone is much less common in Israel than it is in North America. I also got the sense that Israelis prefer the GPS app Waze over other GPS services. That could be in part due to Apple’s decision not to link Jerusalem as the capital of Israel in its Maps application or World Clock on its new operating system. Back in September when Apple CEO Tim Cook admitted that Apple’s mobile Maps application was inaccurate and had many flaws (including the Jerusalem situation), he advised users of OS5 to download alternative navigation apps including Waze which was designed by Waze Ltd., an Israeli company.

Other questionable situations in social media have led many to question whether these are really honest mistakes or politically motivated actions. A recent Huffington Post article titled Did Flickr Delete Israel From Its Map? raises questions about the maps plugin of the photo social networking site Flickr. When the user zoomed in on Jerusalem there were no streets or landmarks as there would be for every other city in the world. The article triggered two responses from Yahoo which now owns Flickr. The first email from a company representative stated that Yahoo was aware of the issue and was working to quickly improve what is a third party map provider problem. There was no mention of why Israel was the only city in the world affected. The full email message from Yahoo read:

The geographical data that appears on Flickr and Yahoo! Maps comes from a third party map provider and we are working with them to understand and improve the gap in geographic coverage that has been reported. Yahoo! always wants to ensure the best possible product experience for our users, and this falls short of those expectations. We are continually working to source and roll out coverage where there is room to provide greater mapping details. In particular, we hope and expect that you will see improved maps coverage of Israel shortly.

The next day Flickr debuted a map that rendered Jerusalem as a normal city with its streets and landmarks returned to the way it was. There was no explanation for the error. 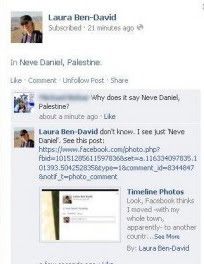 Of all the social networking sites, Facebook seemed to be the least problematic with Israel labeling. It is a very popular site in Israel. However, one Facebook user found that according to the site she no longer lived in Israel proper. Laura Ben-David, writing in the Times of Israel, explains how she suddenly was listed as living in Palestine rather than in Israel on her Facebook status updates:

Sorry, I didn’t share the news that I recently moved. In fact, I didn’t tell anyone. It was so sudden and so fast. We’re not just talking about moving from one street to another, or to a different neighborhood. Not even to another city or region. We’re talking about moving out of the country; out of Israel. Yes, I know it’s a shock to you. It was a shock to me as well. In fact, I found out about the move the same way most people find out things these days: on Facebook. I found out when friends saw a photo I’d taken from home and posted on Facebook, and they told me it was tagged with this new, previously unheard of location, ‘Neve Daniel, Palestine.’

Apparently Facebook no longer lists my town of ‘Neve Daniel’ as ‘Israel’, but rather as a city in ‘Palestine.’ Truthfully, this type of geographical blundering isn’t a particularly new development. In fact, I remember a time when I could ‘choose’ to tag my location either ‘Neve Daniel, Israel’ or ‘Neve Daniel, West Bank.’ Since 2010, Bing Maps have powered Facebook’s Places and locations. Frankly I don’t hold much stock in Bing Maps. A simple search in Bing could not even find Neve Daniel at all, in any country. I don’t know the back end of these programs, or how they work or fail to work. I can say that I successfully tagged the location on a photo, as I’ve done many times, as ‘Neve Daniel, Israel.’ Though what I saw, depending on where I was viewing it, was either only ‘Neve Daniel’ or ‘Neve Daniel, West Bank.’ What other people saw, and what they rushed to tell me and send me screen shots of, was ‘Neve Daniel, Palestine.’

While the situation between the Palestinians and the Israelis is indeed a complicated one, full of nuance, I think most would agree that these social networking sites are not the proper forums to play out the political situation. As far back as March 2008 Israeli settlers were fighting with Facebook to list their home city as part of Israel rather than Palestine. Ultimately, users in such settlements as Ma’aleh Adumim and Ariel were able to switch their hometowns back to Israel. However it seems like Facebook is once again taking it upon itself to determine which country users live in. Facebook groups have popped up urging Facebook to remain neutral in this political matter and not unilaterally list Israelis as living in Palestine.

As Ben-David explained, “We are living in a new reality where our sense of history is being molded – crafted, even – through social media. News outlets are barely fast enough to keep up with the speed by which social media spreads information. Hence it is social media that people today turn to for their news. And their facts. Today’s information from social media will be tomorrow’s history. In other words, if Facebook says it’s Palestine, it must be true. Even though it isn’t.”