Skip to the content
I’ve always said that the only times Jewish people mention Jesus are when they stub their toe, miss the bus, or tell you about their theater tickets to a certain Andrew Lloyd Webber rock opera. Two new books will change that. Rabbi Shmuley Boteach’s Kosher Jesus and The Jewish Annotated New Testament (edited by Marc Z. Brettler and Amy-Jill Levine). The former discusses the Jewish life of Jesus of Nazareth and the latter is a newly revised edition of the Christian Scriptures with notes and essays from Jewish scholars in the hope of making the “New Testament” accessible to Jews.

In my final years of rabbinical school at the Jewish Theological Seminary in New York, I was living and working in Caldwell, New Jersey as a rabbinic intern. One of the congregants at the synagogue, Agudath Israel, was a professor at the College of St. Elizabeth in Morristown, New Jersey. She asked me to give a presentation about Judaism to the women in her undergraduate class. In preparation for my visit she asked the students to submit a list of five questions each that they would like me to consider. Without any exaggeration, a full 90% of the students included at least one question about Jesus Christ in their list.

I had received questions from Christians in the past concerning the Jewish view of Jesus, but that experience confirmed for me just how curious Christians are about how Jews understand Jesus in both historical and theological perspectives. Many of the women in that class at the College of St. Elizabeth were surprised to learn that Jews do not consider Jesus to be the messiah and the entire class was shocked to discover that Jesus’ teachings were not part of the required coursework I was doing in my rabbinical school studies. By far, to this day the most frequent questions I receive from Christians all have to do with the Jewish understanding of Jesus.

The topic of the contemporary view of Jesus among Jews has long been stuck somewhere between taboo and “we just don’t talk about it”. But now, thanks to two new books it is front and center. Rabbi Shmuley Boteach, who refers to himself as “America’s Rabbi” has written a new controversial book that will be released next week. For those who thought Boteach’s Kosher Sex was too radical, his new Kosher Jesus is sure to ruffle feathers. With Boteach, it is difficult to know if he writes these provocative books and articles because he’s genuinely passionate about the scholarly discussion it will generate or if he just lusts after the spotlight. Still playing up his friendship with the late Michael Jackson and very passively campaigning to be the next Chief Rabbi of the British Commonwealth, Rabbi Shmuley Boteach has been busy publicly questioning what all this fuss is about with his new book. In truth, Boteach knows that every Orthodox rabbi and scholar — from Chabad Lubavitch to the Haredim — who attack Kosher Jesus as blasphemous and its author as a heretic are only helping his book sales. 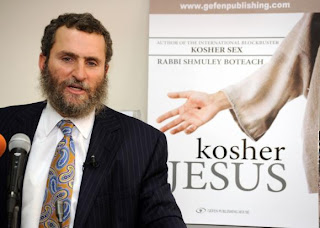 Boteach loves the attention he’s getting and in the weeks leading up to its release has been penning article after article fighting back against his naysayers. In a recent Jerusalem Post article, Boteach wrote, “Unless you’ve been a space-tourist with Virgin Galactic the past few weeks you will know that on [sic] February my new book will be published.” (There’s no doubt in my mind he received a generous kickback from Virgin’s Richard Branson for mentioning Galactic.) Media attention aside, I think Boteach’s book is important and will finally make it “kosher” for Jews to learn about and discuss Jesus as the historical figure.

Boteach’s book portrays the actual story of Jesus’ Jewish life as told in both early Christian and Jewish sources. If you ask most Jews to tell you about the historical figure of Jesus, their response often turns fuzzy after a quick introduction that he was Jewish. Kosher Jesus explains how Jesus was a Torah-observant teacher who instructed his followers to observe the Torah. Jesus’ teachings were quoted extensively from the Torah. And before being murdered by Pontius Pilate, Jesus fought Roman paganism and persecution of the Jewish people. His death was retribution for his rebellion against Rome.

No matter what one believes Boteach’s intentions were in writing this book (more fame, more money, a Chief Rabbi position, setting the academic record straight, or a combination thereof), he clearly did his research on the subject and has taken away the taboo of Jews discussing Jesus of Nazareth. Hopefully, Boteach’s book will give Jews the ability to go a little deeper in their understanding of Jesus. This will be helpful for rabbis like me who often field questions about Jesus from Christians, but it will also prove useful for Jews living in predominantly Christian areas as well as for the Jewish college student with a Christian roommate or agressive missionaries on campus.

As I have been reading the many criticisms of Rabbi Shmuley Boteach and his Kosher Jesus, one thing that I’ve noticed is the strong discomfort his attackers have with even mentioning Jesus. As Josh Fleet mentioned in his Huffington Post article, some of Boteach’s critics refuse to even type out the name Jesus. Instead they refer to Boteach’s book as Kosher J. abbreviating the name of Jesus in a way that is reminiscent of how they refuse to spell out the word “God” or “Lord” choosing instead to use “G-d” or “L-rd”. This struck me as odd as it seems to put Jesus in the same category as God whose name must not be rendered in print (even though the English words “God” and “Lord” are not actual names for the Jewish deity and I’ve never understood a ban on spelling out God’s name in Latin characters). In any event, it is similarly odd that many of Boteach’s critics who are eager to put him in herem (excommunication) for having the chutzpah to publish a book about Jesus of Nazareth are the same Chabad Lubavitch members who seem to be placing their bets that the late Lubavitch rebbe is the messiah. One man’s false messiah is another man’s god. One man’s spiritual leader is another man’s messiah.

I especially like the way Josh Fleet concludes his article about the sharp criticism of Kosher Jesus. Fleet writes, “In 2012, the topic of Jesus should not be a Jewish taboo. If we believe so much that our relationship with Christianity is based on deceit, tragedy and senseless hatred — that it has broken us — then we are obligated to believe it can be based on trust, opportunity and boundless love — that it can be fixed.” Well stated, and I believe that what will equally help fix the way Jews deal with the topic of the historical Jesus will be the new contribution by Brandeis Professor Marc. Z. Brettler and Vanderbilt Prof. Amy-Jill Levine. Their new version of the New Testament is revolutionary in that it has been published for Jews.

I am always surprised when Christians are surprised that New Testament studies was not part of my academic courses in rabbinical school. No matter how many times I explain that Jews do not believe our Torah has been superseded by the “New Testament”, Christians still don’t understand this concept. It’s as if they think that we’re big fans of the first Godfather movie and yet refuse to watch the sequel. In truth, most Jews who are knowledgeable about the Jewish Bible have little clue about the narrative of the “New Testament”. One of the primary reasons for this has been the Jewish ban on studying Christian religious texts for theologically dogmatic reasons. However, the new version that Brettler and Levine have put forth seems to make this scholarship safe for Jewish students.

An article in the USA Today explains Prof. Levine’s intentions in completing this project:

The project, published in November by Oxford University Press, is the latest effort in Levine’s lifelong quest to help Jews and Christians understand each other better.

That quest started when she was growing up among Portuguese Roman Catholics in North Dartmouth, Mass. She was fascinated by her schoolmates’ faith and horrified when one of them told her that the Jews had killed God by crucifying Jesus.

She made it her life’s work to prevent Christians from spreading that kind of anti-Semitic claim and to help build a bridge between the two faiths.

After all, she said, Jesus and his early followers were Jews. So the two faiths have much in common.

The Annotated New Testament points out places where Christians get Judaism wrong.
“The volume flags common anti-Jewish stereotypes, shows why they are wrong and provides readings so that the Gospel is not heard as a message of hate,” Levine wrote in an email. “These stereotypes include the Old Testament/Jewish God of wrath vs. the New Testament God of love and the view that Judaism epitomized misogyny and xenophobia.”

When you consider how little most Jews know about Jesus from a historical perspective, it is actually an exciting time when this discussion will no longer be taboo. While some religious Jews will claim it is dangerous to read books like Kosher Jesus or to have Brettler and Levine’s commentary of the “New Testament” on your bookshelf for reference, I actually think that this will lead to better Jewish-Christian dialogue. It will also alleviate so much of the misinformation and ignorance that many Jews have about Christianity and its roots. I’m eager to see where this leads and I’m grateful to Rabbi Shmuley Boteach for having the conviction to publish Kosher Jesus, and to Profs. Brettler and Levine for using their scholarship to educate us on a religion about which we have been hesitant to learn more.