Skip to the content
This Saturday night begins the sundown to sundown Tisha B’Av fast. It is a longstanding tradition marked by a day of communal mourning and reflection.

I wasn’t around 2,000 years ago when my people’s Temple was destroyed and thousands perished.

But, I am around today and that is why I will take the time to honor those who lost their lives in that tragedy. 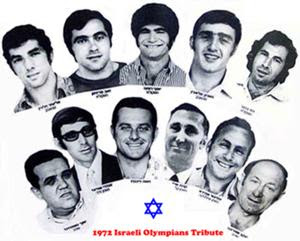 Today begins the Summer Olympics in London. It is a longstanding tradition marked by 17 days of athletic competition among nations.

I wasn’t around 40 years ago when 11 Israeli men lost their lives at the Summer Olympics in Munich.

But, I am around today and that is why I will take the time to honor those who lost their lives in that tragedy.

Shame on the International Olympic Committee for not recognizing the importance of memorializing this tragedy. Please take a minute today during the Opening Ceremonies to remember The Munich 11.

For some reason, whenever the Jewish holiday of Purim rolls around, my brain uncontrollably starts coming up with parodies, satires, spoofs, and just plain silliness.  Here’s a collection of the news items circulating in my head. Happy Purim!

By Rabbi Jason, the Official Rabbi of the 2010 Olympic Games
Sponsored by Toyota: “Toyota… We’re Unstoppable!”

Jewish Music at the Olympics: From Reggae to OyVey 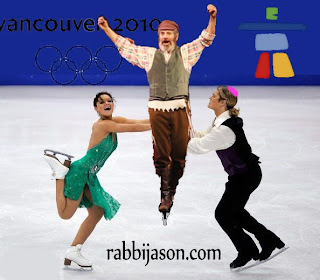 VANCOUVER – With the decision to use Matisyahu’s song “One Day” as the official Winter Olympics theme, Jewish people around the globe undoubtedly celebrated that Jewish music was now cool. I mean, it’s the Olympics! Jews are used to “members of the tribe” creating hit music for the masses, but it usually comes in the form of Christmas music (see Irving Berlin, Mel Torme, etc.). Well, it appears there wasn’t much time for rejoicing because just as millions of people were getting Matisyahu’s upbeat song stuck in their heads, along came a brother and sister duo to set Jewish music back a couple hundred years.

As soon as they learned they had to prepare a folk music tribute to their native Israel, the Zaretsky figure skating team of Sasha and Roman apparently ran to Wikipedia and searched for “Stereotypical Jewish Music.”  Their “Hava Nagila” rendition was apparently the Zaretsky’s best guess at what the shtetl of Eastern Europe would have looked like at weddings if only they had ice rinks. And as if their first attempt at skating to “The Music of the Yid” wasn’t schmaltzy enough, they came back the next night and gave a performance that only Mel Brooks could love. While the Israeli skaters’ tribute to the Holocaust was rather quite moving, I can’t imagine that Steven Spielberg watched it thinking, “Gosh, I can’t believe I didn’t go with the ice dancing motif for Schindler’s List.”

For those Jewish people who didn’t feel like the ice dancing competition at this year’s Winter Olympics touched on enough Jewish stereotypes, get excited for the next Olympic games when all Jewish figure skaters will be required to have their mother on the ice during performances yelling at them to put on a jacket or they’ll freeze! 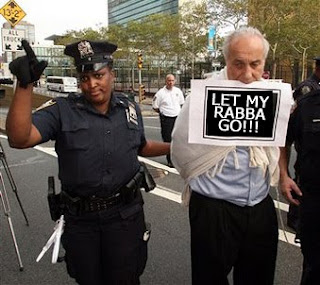 The Orthodox Rabbi best known for chaining himself to buildings in protest and leading rallies for Jewish causes is now in big trouble.  Riverdale NY-based Rabbi Avi Weiss ordained a female rabbi over a year ago. However, instead of calling her anything close to “Rabbi,” he sneakily chose to give her an acronym as a title: “AWSHIT,” which apparently stands for Avi Weiss Says He Is Tenacious. No doubt, the name was Weiss’s way to let the Ultra Orthodox know how he felt. But they didn’t seem to really mind the title he granted to Sara Horwitz, until he updated it to “Rabba.”


Now, the Orthodox are calling for Avi Weiss to be excommunicated and banished to Siberia. The irony, of course, is that this is a man who fought so hard to get Jews out of Siberia in the first place. In protest, Rabbi Avi Weiss has chained himself to Rabba Sara Horwitz in an act of solidarity. The Ultra-Orthodox have claimed that this is fine with them, so long as Avi Weiss doesn’t dance with the woman.  In other news, the Conservative Movement now claims that Rabba Sara Horwitz is an aguna (a “Chained Woman”) and has granted her an immediate get (bill of divorce) from Rabbi Weiss.

Currently, Comedy Central has a weekly series (“Tosh.0”) that shows all those funny videos from the Web that have gone viral. Well now, Comedy Central is proud to introduce a new series that replays all the videos from the Web that are virulent.  Any video starring an Iranian in a “Members Only” jacket will be shown on “HamanTosh.0,” beginning on February 31.  Check local listings for airtimes. 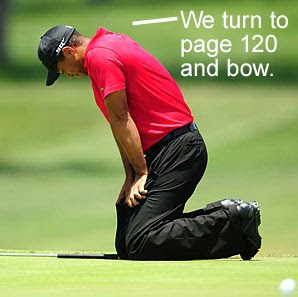 With its numbers in sharp decline, the Conservative Movement of Judaism is deeply invested in change. In an effort to grab media attention, the centrist movement of modern Judaism is now looking to go for the Trifecta. In a press release prepared by TMZ.com, Jewish Theological Seminary Chancellor Arnie Eisen explained, “First we shocked the world by allowing gays and lesbians into our esteemed institution to become rabbis.  Next week, we will quickly make the move to grant admission to intermarried men and women.  And, I’m pleased to announce that beginning on April 1st, we will unveil a new program designed to ordain disgraced celebrities as rabbis and cantors at JTS.

We have already invited some big-name, dishonored celebrities to apply to our program. Rabbi Danny Nevins, Dean of the Rabbinical School, said, “Don’t be surprised to see Rabbi Tiger Woods by the end of the year.”  Also expected to be studying at the Conservative Movement’s flagship institution will be Mark McGwire, who also plans to pursue a master’s degree in pharmacology at JTS, and the gun-toting NBA star Gilbert Arenas. Classes in “Anger Management” and “Press Conference Contrition” will be added to the curriculum.

In what is perhaps the most shocking news to come from the Conservative Movement is that the new United Synagogue of Conservative Judaism CEO Rabbi Steven Wernick has been replaced by former vice-presidential candidate John Edwards, who took the job with the stipulation that a day care center be opened at the USCJ headquarters.

Following the news that a Bar Mitzvah will take place this June at Yankee Stadium before a championship boxing match, NASCAR has announced that it will hold a Bris (ritual circumcision ceremony) at its next championship race at Talladega SuperSpeedway.  The Bris will be sponsored by Fast Eddie’s Chop Shop (“You Steal ‘Em, We Deal ‘Em”). Due to the fact that 100,000 fans will be waiting for the Formula One race to begin, there will only be 2 minutes allotted to the ritual Jewish ceremony, but that’s no problem as NYC circumcisor Phil “Sling Blade” Sherman (emohel.com) has promised to race his way through the procedure in chop-chop fashion. However, if the race is about to begin, Sherman said he’ll just have to cut it short. 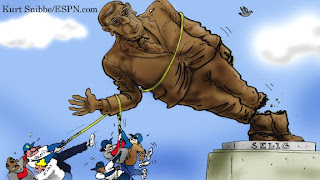 Bud Selig, the Jewish Commissioner of Major League Baseball (MLB), is being honored with a statue outside of Miller Park, home of the Milwaukee Brewers (which Selig owns – Yes, a Jewish owner of a sports franchise… shocking, I know!). Unfortunately, the statue may never be erected because Selig’s own rabbi is standing in the way. Rabbi Ann Heiser-Busch of Congregation Beth Ale in Milwaukee (on the Miller Brewing Company Campus) explained that most people think that she is against the erection of the statue honoring her famous congregant on the grounds that the Torah clearly prohibits the creation of a graven image of a human being because it is idol worship. However, Rabbi Heiser-Busch cited as her objection the fact that the construction workers would have to inject themselves with steroids to build up the necessary strength in order to lift the Bud Selig statue. When asked to comment, Commissioner Selig asked, “What are steroids?” 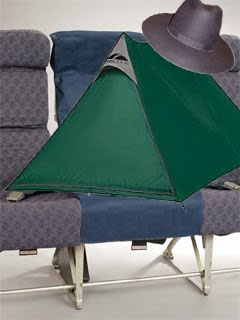 What’s a Haredi Jew to do when he travels on a plane? It seems like the whole aviation industry is against him. First, the kosher meals are served cold and soggy. Then, there’s not enough space in the overhead compartment for his hat box. And the latest attack is that the flight attendants are convinced he’s strapping bombs to his head and arm in the form of tefillin.  The worst part about air travel for the Ultra Orthodox is that a member of the opposite sex (e.g., a woman) might occupy the next seat.  However, a new product on the market solves that problem.  The Personal Mechitza is just what the Rebbe ordered.  This barrier not only separates the sexes and keeps the immodest neighbors on the plane from view, but it also guards against the scandalous in-flight movies.

However, now rabbis are complaining that these personal mechitzas aren’t good enough. Rabbi Haskel Lookoutstein, an advisor to the FAA, explains that it’s possible a Reform Jew worked in the factory where the Personal Mechitza was made and came in contact with the apparatus. Or, he went on, what if one is using a Personal Mechitza and the person in the seat next to you sneezes and some of the treif they’re eating flies over the top of your Personal Mechitza and gets on your Extra-Glatt Kosher meal? That is why Rabbi Lookoutstein recommends putting up an extra mechitza around the Personal Mechitza.  In fact, he says that the most pious will simply purchase every seat in the row and put up the new Glatt Mechitzah L’Mehadrin.

To paraphrase an old joke: Are the Ultra Orthodox now going to forbid figure skating because it can lead to mixed dancing?

Uriel Heilman writes on the JTA Blog, “It was probably the first time in Olympics history that a kippah was an integral part of an athlete’s uniform. When the Israeli brother-sister ice dancing team Roman and Alexandra Zaretsky took to the ice in Vancouver on Sunday night, the pair chose a ‘traditional Israeli’ folk dance.” 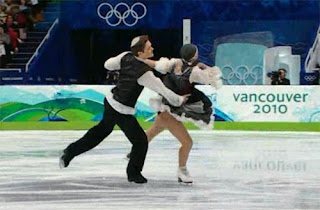 The couple danced to the Jewish folk song “Hava Nagilla,” often sung at Jewish weddings. Heilman notes that the appearance of the yarmulke on Roman Zaretsky’s head makes him look like a nice Orthodox Jewish boy, but his “earring was a bit incongruous.”

While it was great to see an Israeli wearing a kippah while figure skating in the Olympics, I thought the costumes were a little over the top in the “stereotype department.” Not to mention that Alexandra Zaretsky’s skirt would not have gone over well in the Fiddler on the Roof shtetl. And yet, the performance by the Zaretsky brother-sister duo wasn’t the one deemed the most controversial in the Olympic competition. This year, the theme for the ice dancing original dance was folk dancing, which was supposed to represent the “flavor” of one country or another.

Some pairs, like the Israelis, chose folk dances that represented their own country (although I’m not sure all Israelis identify with a 19th century Eastern European shtetl dance). Other couples honored cultures other than their own. The Russian pair of Oksana Domnina and Maxim Shabalin did an Australian Aboriginal dance that drew criticism from Aboriginal leaders who found the dance and costumes offensive.

I’m sure the Israelis could have skated to an Israeli folk song without dressing up in the most stereotypical Jewish costumes. After all, if they wanted to represent Israel they should remember there are other populations in Israel, such as the Sephardic Jews, who don’t feel a connection to the Jews represented in The Fiddler on the Roof. As for the Russians, they should have learned their lesson from their last performance when they dressed up in Aboriginal costume and set off a firestorm of criticism.

Here is the video of Israeli Ice Capades