Skip to the content
One of the highlights of my six years in Rabbinical School at The Jewish Theological Seminary was giving tours of the Seminary to visiting groups. I attended a training session, led by the director of donor relations Rebecca Jacobs, the Wednesday before Thanksgiving during my first year at JTS. I loved hearing the story of how the Seminary’s library tower caught fire on April 18, 1966 damaging thousands of books and how thirty years later a JTS-ordained pulpit rabbi from Omaha donated the funds to renovate that same tower. 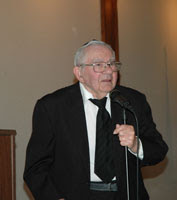 I gave over 200 tours of the Seminary, but I never grew tired of telling the story of how a humble rabbi from the south amassed a fortune big enough to make a $7 million cash donation to name the new Seminary tower. The story is that this rabbi’s wife, Dorothy Kripke, wrote a series of children’s books entitled “Let’s Talk About…” and another Omaha woman loved to read these books to her children. When she found out that the author lived close by she decided she had to meet her. Well, as fate would have it, this woman and her husband became dear friends of Rabbi Myer and Dorothy Kripke. This woman’s husband even offered to invest the small inheritence left to Mrs. Kripke. That investment paid off big because it was invested by Warren Buffett, the second wealthiest American according to Forbes magazine.

I’ll never forget the time I asked a group of school children if they knew how Rabbi Kripke became a millionaire. One of the little girls offered, “Maybe he gave really good sermons?”
Here’s a JTA article about Warren Buffett who recently invested $4 billion in an Israeli company:

Long before Israeli deal, Buffett made his mark on Jewish community
By Chanan Tigay
NEW YORK, May 16 (JTA) – Warren Buffett is not a Jew, and in fact describes himself as an agnostic.

Still, the billionaire investment guru, who earlier this month made big news when his Berkshire Hathaway corporation bought an 80 percent share in Israeli metalworks conglomerate Iscar for $4 billion, for years has been making his mark on the U.S. Jewish community back home – though sometimes in a roundabout way.

“Proportionally, if you look at the number of Jews in this country and in the world, I’m associated with a hugely disproportionate number,” Buffett, the second richest man in the world, told JTA in a telephone interview Monday. His life, he added, “has been blessed by friendship with many Jews.”

Among the first companies Buffett acquired after launching Berkshire Hathaway, the Omaha-based investment and insurance giant, was The Sun Newspapers of Omaha, then owned by Stan Lipsey, one-time chairman of The Jewish Press, Omaha’s Jewish newspaper.

“At the time, the Omaha Club did not take Jewish members, and the Highland Country Club, a golf club, didn’t have any gentile members,” Lipsey recalls. “Warren volunteered to join the Highland” -rather than the gentile club – “to set an example of non-discrimination.”

Buffett happily recalls the fallout from his application.

But that wasn’t the end of the story, Buffett tells JTA. The Highland had a rule requiring members to donate a certain amount of money to their synagogues. Buffett, of course, wasn’t a synagogue member, so the club changed its policy: Members now would be expected to give to their synagogues, temples or churches.

But that still didn’t quite work, Buffett recalls with a laugh, because of his agnosticism.

In the end, the rule was amended to ask simply that members make some sort of charitable donation, and the path to Buffet’s membership was clear.

“He’s an incredible guy,” says Lipsey, today the publisher of the Buffalo News. In 1973, The Sun won a Pulitzer prize in Local Investigative Specialized Reporting for an expose on financial impropriety at Boys Town, Nebraska.

“Warren came up with the key source for us knowing what was going on out there,” Lipsey says.

In the 1960s, Omaha Rabbi Myer Kripke decided to invest in his friend Buffett’s new business venture. Their wives had become friendly, he says, and the foursome enjoyed playing the occasional game of bridge together.

“My wife had no card sense and I was certainly no competition to Warren, who is a very good bridge player and a lover of the game,” Kripke, rabbi emeritus of Omaha’s Conservative Beth El Synagogue, told JTA. “He’s very bright and very personable and very decent. He is a rich man who is as clean as can be.”

Kripke, father of the noted philosopher Saul Kripke, bought a few shares in Berkshire Hathaway and quickly sold them, doubling his money, he says.

Recognizing a good thing when he saw it, he bought a bunch more shares in his friend’s company, shares that by the 1990s had made Kripke – who says he never earned more than $30,000 a year as a rabbi – a millionaire.

Kripke met his late wife, the children’s book author Dorothy Kripke, at the Jewish Theological Seminary in New York, the flagship institution of the Conservative movement, where Kripke was ordained as a rabbi in 1937.

In 1996, flush from their prescient investment with Buffet’s company, the couple decided to make a major gift to JTS – $7 million in cash to restore the building’s damaged tower, and a deferred gift of some $8 million, which the seminary will receive after Kripke passes away.

Kripke – who says he’s still got a picture of Buffett’s late wife, Susan, on his bulletin board – concurs. Asked if he credits Buffett with his financial success, he doesn’t hesitate.

The Israeli government stands to reap about $1 billion in taxes on Buffett’s purchase of Iscar. Shortly after announcing the deal, Buffett says he was surprised to learn that a Berkshire subsidiary, CTB International, was purchasing a controlling interest in another Israeli company, AgroLogic.

In Israel – which Buffett plans to visit in the fall – the hope is that the deals will have longer legs: Buffett himself has not ruled out future purchases there and, considering his status as a leading investor, observers say others also may take a look at Israeli companies now that Buffett has done so.

“You won’t find in the world a better-run operation than Iscar,” Buffett says. “I don’t think it’s an accident that it’s run by Israelis.”

The Sun newspaper group was not Buffett’s only early purchase of a Jewish-owned company. In 1983, sealing the deal with a handshake, Buffett bought 90 percent of the Nebraska Furniture Mart from Rose Blumkin, a Russian-born Jew who moved to the United States in 1917.

In 1989, he purchased a majority of the stock in Borsheim’s Fine Jewelry and Gifts, a phenomenally successful jewelry store, from the Friedman family.

“He has many friends in the Jewish community,” says Forrest Krutter, secretary of Berkshire Hathaway and a former president of the Jewish Federation of Omaha.

Buffett’s former son-in-law, Allen Greenberg, is a Jew, and now runs the Buffett Foundation, much of whose work has dealt with reproductive rights and family-planning issues. Buffett’s personal assistant is Ian Jacobs, who goes by his Hebrew name, Shami.

Buffett himself counts the late Nebraska businessman Howard “Micky” Newman and philanthropist Jack Skirball as among his “very closest friends.”

Further, Buffett says his “hero and the man who made me an investment success” was Ben Graham. Graham, along with Newman’s father, Jerry, ran a New York fund called Graham-Newman Corp.

“After besieging Ben for the three years after I received my degree from Columbia, Ben and Jerry finally hired me,” Buffett says. “I was the first gentile ever employed by the firm – including secretaries – in its 18 years of existence. My first son bears the middle name Graham after Ben.”

Buffett “is very much honored in the Jewish community,” Kripke says.