I missed being born on America’s bicentennial by only twenty days. July 4, 1976 was a momentous day for our nation, but I missed it.

It wasn’t until about fifteen years later that I would learn that America’s 200th birthday wasn’t the only important event that occurred on July 4, 1976. As a high school student, I attended a United Synagogue Youth (USY) Jewish youth convention at a hotel outside of Detroit. I wasn’t a board member of my congregation’s USY chapter and as such wasn’t allowed to vote in the election of regional officers. The “alternative activity” for non-voting convention attendees was to watch a movie. The movie selection was a 1977 film titled “Operation Thunderbolt.”

The movie was about Operation Entebbe, the hostage-rescue mission carried out by the Israel Defense Forces (IDF) at Entebbe Airport in Uganda. A week earlier, an Air France plane carrying 248 passengers was hijacked by Palestinian terrorists and PLO supporters. The hijacked aircraft was diverted to Entebbe, outside the capital of Uganda. After landing, all non-Jewish passengers were released. Acting on intelligence from the Mossad, the IDF carried out a nighttime operation to rescue the hostages. The 90 minute rescue mission was a success, but the mission’s commander, Yonatan Netanyahu, was killed in action.

Watching the film, I recalled learning about Yoni Netanyahu at Jewish summer camp and at Jewish day school. However, I never knew the story behind his death and heroism. I was fascinated by the planning that went into the mission and the subsequent rescue of the hostages. From the movie, I learned about the ruthless dictatorship of Uganda and its villainous leader Idi Amin.

I’ve watched “Operation Thunderbolt” several more times since that first time in a hotel conference room. I’ve also seen the movie “Raid on Entebbe” with Charles Bronson, James Woods and Peter Finch and “Victory on Entebbe,” which was released in 1976 shortly after the rescue mission and stars an impressive cast of Anthony Hopkins, Burt Lancaster, Elizabeth Taylor and Richard Dreyfuss. 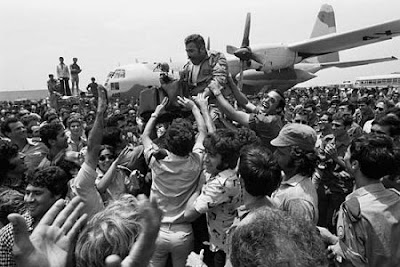 Following the rescue mission, the government of Uganda convened a session of the United Nations Security Council to seek official condemnation of the Israeli raid as a violation of Ugandan sovereignty. The Security Council ultimately declined to pass any resolution on the matter, condemning neither Israel nor Uganda for the terrorist act.

In his address to the Security Council, Israeli ambassador Chaim Herzog said: “We come with a simple message to the Council: we are proud of what we have done because we have demonstrated to the world that a small country, in Israel’s circumstances, with which the members of this Council are by now all too familiar, the dignity of man, human life and human freedom constitute the highest values. We are proud not only because we have saved the lives of over a hundred innocent people—men, women and children—but because of the significance of our act for the cause of human freedom.”

I hope we continue to teach this important event to children so they, like me, will take pride in Israel’s rescue of innocent civilians. This operation was a courageous, well-planned mission to save the lives of the hostages.

At that USY convention I was at first disappointed not to be allowed to vote in the election of officers, but upon reflection I am grateful that I wasn’t able to vote. Instead I was offered a glimpse into history and I learned that July 4, 1976 was much more than America’s bicentennial. It was an unforgettable day for Israel and in the worldwide fight against terrorism.

(c) Rabbi Jason Miller | http://blog.rabbijason.com | Twitter: @RabbiJason | facebook.com/rabbijasonmiller
As a rabbi, I’m hesitant to publicly endorse any political candidates. First, I try to keep my politics private; and second, I don’t want to jeopardize the tax-exempt status of any non-profit organizations which I represent. However, I’m going to go out on a limb here and endorse my friend and rabbinic colleague for Uganda’s National Parliament. 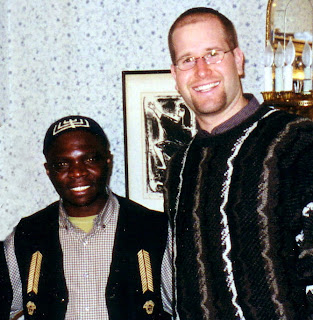 Rabbi Gershom Sizomu, who was recently ordained at the American Jewish University, is running for National Parliament of Uganda. When Gershom is elected, he’ll be the first Jew ever elected to any national office in Uganda. What’s more is that he will be the first rabbi to be seated in nationally elected government outside of Israel. Very impressive!

The Be’chol Lashon website quotes Gershom explaining that his political mission is directly connected to his religious vision. He says, “It is important that local and national government officials be tolerant and foster a climate of understanding between religious groups.” Rabbi Ruth Abusch-Magder, of Be’chol Lashon, explains that “his vision of religious tolerance runs counter to the discrimination he experienced growing up during the rule of Idi Amin Dada. Under Amin, Judaism was banned and the native Jewish community, called the Abayudaya, was persecuted.”

I first met Gershom Sizomu when he came with J.J. Keki on a speaking tour to the U.S. I found him to be a mensch who is only concerned with the best interests of his people. I hope that the Ugandan people will vote for Rabbi Gershom Sizoum in the February 18, 2011 National Parliament elections.