Here’s my latest post on the Jewish Techs blog (The Jewish Week):

Chabad Lubavitch has always been out in front when it comes to using the Internet for publicity. Back in the 90’s, Chabad took full advantage of the virtual communities on America Online (AOL) and then launched some of the most impressive websites once everyone migrated to the Web. For years, Chabad has been a strong force in Cyberspace with “Ask the Rabbi” websites, online distance learning, and viral videos. 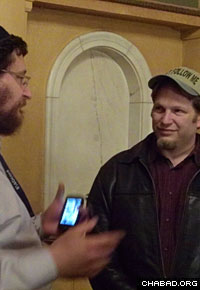 Today, Chabad utilizes social networking to not only broadcast its message globally, but to also win financial grants. Chabad schools and service organizations, like the Friendship Circle, use Facebook and Twitter to rack up hundreds of thousands of votes in contests for mega grants by such corporations as Chase Community Giving and Target Stores. In last month’s Kohl’s Cares contest, twelve Jewish day schools in the U.S. finished in the top 20 of the competition, with eleven of those schools being Chabad-affiliated according to the Lubavitch.com website (Each of the finalists received a $500,000 prize).

Last January, Chabad’s Michigan-based Friendship Circle, an organization dedicated to helping children with special needs, won $100,000 when it finished third in the Chase Community Giving Challenge on Facebook after using several social media tools to get out the vote. And this past summer, 17 Chabad programs across the United States each received $20,000 in the second running of the Chase challenge.

Motti Seligson, a spokesman for Chabad.org and its social media guru explained Chabad’s secret in these online contests in a JWeekly article.

While scores of Chabad organizations may have started out as entrants in the Chase or Kohl’s challenges, the network as a whole figured out pretty quickly which ones had a serious chance of winning and then placed its chips on the potential winners. The method has proven to be especially valuable in the Kohl’s challenge, Seligson said. Each voter can vote a total of 20 times, and only five times for one school. Hypothetically that means if supporters of one school cast votes for the school five times, they each have 15 votes left. Those voters may then cast five votes each for three other Chabad schools. During the Chase challenge, it became clear that the Chabad-affiliated Friendship Circle of Michigan had a shot at winning a prize, so the other 100 Friendship Circle outposts throughout the United States rallied behind their Michigan counterpart. It’s not cheating or skirting the rules, Seligson said, it’s just actualizing a social network effectively.

Fellow Detroiter Ronelle Grier recently wrote an article on Chabad’s social networking prowess for Chabad.org. In one section of her article she writes that two Chabad leaders, the Friendship Circle’s Bassie Shemtov and “The Recovery Rabbi” Yisrael Pinson (#recoveryrabbi) were speakers at the recent #140conf in Detroit. I also attended the conference, presented by Jeff Pulver, and heard several comments from participants about how Chabad’s exploitation of social media is so impressive and a model for other organizations. Grier writes,

Rabbi Zvi Drizin, who considers social networking essential to promoting the activities of InTown Chabad, his Dallas-based organization geared toward young adults who have finished college, but are not yet married. He makes extensive use of Facebook to announce events, share interesting links and idea, and post photos taken at recent programs.

“When you decide to go to any party, the first thing you ask is who’s going to be there,” he says. “People have always moved with their friends. If you have a good network, it expands your appeal.”

At a recent Shabbat dinner, Drizin planned for 80 people. After he posted details of the event on Facebook, 150 people showed up at his door.

While Rabbi Yisrael Pinson lives and works in my community, it is really through Twitter that we’ve gotten to know each other. He’s been successful in his addiction recovery work because of his social media connections. In Grier’s article, Pinson said that Rabbi Menachem Schneerson would likely have approved of the use of such tools in the advancement of Judaism. “The Rebbe was a champion of using new tools for the promotion of Jewish values and spirituality. His talks were broadcast over the radio when that was the revolutionary medium. So too, it’s fitting for us to be at the forefront of this revolution. Social networking’s value lies in its ability to connect seemingly discordant strands of humanity. The person you meet may not be the one who can help you, but he may know the person who will end up helping you.”