It’s become expected that there will be some sort of a giveaway at sports events. Fans leave the stadium or arena with everything from posters of the star player to bobble-heads and t-shirts. Every once in a while, a team gets a little more creative.

And that’s exactly what happened in Florida. According to Greg Wyshynski in a Yahoo! News article, the Florida Panthers are scheduled to have their Hanukkah celebration during next Tuesday’s home game against the Colorado Avalanche. The Panthers are publicizing the game as “the biggest Hanukkah party in South Florida.” 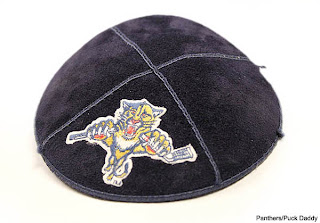 So, what does it mean to have a Hanukkah party at a pro hockey game? Using jelly donuts for the pucks would pose some obvious logistical problems. I’m sure they’ll be lighting a menorah at some point in the game, but what is sure to make news is the Florida Panthers’ choice for a Hanukkah giveaway at Tuesday’s game.

The official Florida Panthers yarmulke, or kippah, will be handed out to all ticket holders before the game. No word on whether the NHL team is egalitarian in this regard and will be giving the kippahs out to the ladies as well.

I know from experience that these round, black leather kippahs will fly like a frisbee when thrown. And that’s exactly what the home team will do if a Panthers player scores three goals for a Hat Trick. Although, on this night it would be a Kippah Trick of course.

Who knows if the fans will even wait for a Hat Trick to throw the yarmulkes on the ice? I suppose it’s better than throwing a live octopus on the ice like Detroit Red Wings fans throw come playoff time. I mean those things aren’t even kosher!

While “Hanukkah Night” at the hockey game sounds like fun, the Florida Panthers deserve to go to the penalty box for the kippah giveaway, which just sounds to me like a High Shtick!