The Holocaust Memorial Center in Detroit, Michigan is the nation’s first Holocaust memorial. It was originally located in a building connected to the Jewish Community Center in West Bloomfield. It was this Holocaust museum that I toured with my grandfather when I was twelve-years-old and listened to him explain that many of his family members — my relatives — perished in the Shoah.

Several years ago that Holocaust museum moved to a new location a few miles away in Farmington Hills. The space that was originally occupied by the Holocaust Center is now a teen center where Jewish youth come to watch movies, play video games, eat pizza, and compete in pool and ping-pong tournaments. It is also where hundreds of Jewish teenagers come to dance to loud music.

The symbolism is not lost on me. This space was originally dedicated as a museum to pay tribute to the victims of the Shoah and to memorialize the six million souls who perished. It was a solemn space to educate about the Holocaust so that history wouldn’t be repeated. But today, it is a space where Jewish young people (many the grandchildren and great-grandchildren of Holocaust survivors) can celebrate that “Am Yisrael Chai” — the Jewish people have endured. Hitler and the Nazis were not successful because the Jewish people are alive today and our children sing and dance at the Jewish Community Center and in the location originally consecrated as a museum of memory. 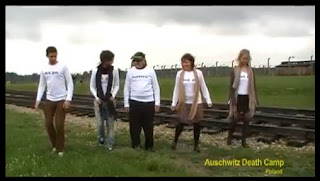 It is in this spirit that I embraced the YouTube video of a Holocaust survivor dancing with his grandchildren to the tune of Gloria Gaynor’s song “I Will Survive” in front of Auschwitz, the Nazi concentration camp. The original video, which was viewed over 500,000 times in one day, has since been removed from YouTube for a copyright violation. However, it was likely removed due to the controversy it created. The reposted video is below.

Australian Jewish artist Jane Korman filmed her three children and her father, 89-year-old Holocaust survivor Adolk, in the video clip “I Will Survive: Dancing Auschwitz.” The clip depicted the Korman family dancing in front of Holocaust landmarks in Poland, including the infamous entrance sign to Auschwitz death camp reading “Arbeit Macht Frei,” a Polish synagogue, Dachau, Theresienstadt, and a memorial in Lodz.

Her father at one point in the clip even wore a shirt on which the word “Survivor” was written. During a recent family visit to Israel Korman said that she thought of the idea after she encountered hatred toward Israel and Jews in Australia and added that she wanted to give her concerns presence during the heritage tour of Poland she recently took with her family, and take a different approach to the matter.

Haaretz newspaper reported that “Many Jewish survivors have reacted gravely to the video, accusing her of disrespect. Yet Korman told Australian daily The Jewish News that ‘it might be disrespectful, but he [her father] is saying ‘we’re dancing, we should be dancing, we’re celebrating our survival and the generations after me,’ – the generation he’s created. We are affirming our existence.'”

This is clearly a work of art, but it is also a powerful message that no matter how horrific and catastrophic were the acts committed by the Nazis in the last century, the Jewish people are still having children and grandchildren, and we are dancing together in joy all over the earth. Even on the land that buried millions of members of the Jewish faith, the Jewish people are still rejoicing with our future generations.

What do you think about Holocaust survivors dancing with their grandchildren at Auschwitz?