I work as the rabbi at a Jewish summer camp. We have eighty campers from Israel join us each summer. Many of these young campers, like most Israelis, are not familiar with liberal, alternative forms of religious expression in Judaism. In Israel, Judaism is black and white. You either do it or you don’t – secular or religious. Even the Israeli youth at camp who have heard of the Conservative and Reform movements still don’t really understand what it means to be a Conservative or Reform Jew.

This morning, a 12-year-old Israeli boy approached me and asked, “You’re not an Orthodox rabbi, right?” No, I responded wearing my cargo shorts, t-shirt, and shortly cropped hair with a knitted kippah. I told him that I’m a Conservative rabbi. He said that’s what he figured but he wasn’t sure. He then said something that caught me off guard. In Hebrew he asked, “That sefer Torah (Torah scroll) that you read from on Shabbat morning at services here at camp isn’t kosher, is it?”

I explained that the Torah is most certainly kosher, but I understood immediately where his doubt came from. I told him that our camp actually owns two kosher Torah scrolls and that this particular one we’ve been using this summer was on loan from a local synagogue. Based on the Judaism that he sees in his native Israel, he found it difficult to believe that a non-Orthodox rabbi could possess a valid Torah scroll.

In Israel today, the ultra-Orthodox (Haredi) establishment is calling the shots when it comes to religious law. Israelis like to boast that their country is the only true democracy in the Middle East, but when it comes to matters of religion, Israel is beginning to look more like one of those backward, primitive religious states in the Islamic world at which we roll our eyes. 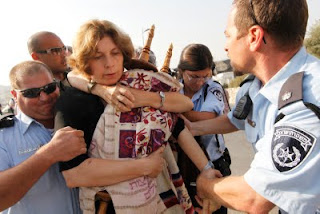 Each month, on Rosh Chodesh (the beginning of the Jewish month), the Women of the Wall gather in Jerusalem for a women-only prayer service. These prayer meetings have been turned into a media circus ever since Nofrat Frankel was arrested for wearing a tallit (prayer shawl) a few months ago. Yesterday, Women of the Wall leader Rabbi Anat Hoffman was arrested for carrying a Torah scroll from the Western Wall women’s section to the Southern Wall area where the Chief Rabbinate and the police both agreed that women could read from the Torah.

My colleague, Rabbi Danya Ruttenberg, was part of this group and witnessed Anat’s arrest. She detailed the incident in a jewschool post. She writes:

We finished Hallel and began to proceed, according to the terms of the Israeli High Court (Bag”tz) decision, to Robinson’s Arch to read Torah, with the intent to preserve the continuity of the service by escorting the Torah in song. Now, it should be noted here that WoW has had a hard time lately getting the Sefer Torah into the Kotel area, even though Bag”tz permitted it in its ruling. I won’t reveal how they got it in this time around, but it took some maneuvering.

It is perfectly kosher, according to the Bag”tz ruling, to take the Sefer Torah out of its bag, as Anat did this morning, by the Kotel, to carry it to Robinson’s Arch. It is not permitted to read from the Torah in the women’s section, and we did not. We were singing and escorting the Torah, and things got more and more tense, with police trying to physically push Anat out of the women’s section and she (and those of us holding on to her) was trying to walk out, but at a more dignified pace. Eventually there was a skirmish involving the police trying to physically take the Torah out of her hands (we were now out of the women’s section and on our way over to Robinson’s Arch) and somewhere in all of that, they arrested her, and she was taken into custody (as was the Torah).

Many Conservative and Reform rabbis have written articles recently expressing the notion that the real enemy in Israel is us. Often the greatest threat is from within.

Just today, a law called the Rotem Bill is moving closer to final passage in the Knesset (Israel’s parliament). This law began as a proposal by the Yisrael Beitenu party to streamline conversion for Russian immigrants, but it has been twisted into an attack on non-Orthodox Jews. This bill will vest all authority for conversion in the hands of the Chief Rabbinate and guarantee that only a particular Orthodox approach to defining Judaism will become the guideline for determining who is recognized as a convert to Judaism. The Rotem Bill would overturn earlier protections for non-Orthodox converts and threaten the legitimacy of Reform, Conservative, Reconstructionist and other converts to Judaism who wish to become citizens or be otherwise recognized by the state as Jewish.

I’m proud of my Jewish heritage and I feel blessed to be a rabbi. However, the notion that a woman can be arrested in Jerusalem, the capital of the Jewish homeland, for holding a Torah scroll is infuriating. I believe that it is healthy to have differing viewpoints and expressions of Judaism, but the ultra-Orthodox monopoly on religion in Israel must cease. The video footage (below) showing the police brutality toward the Women of the Wall is disgusting.

In a week on the ninth of Av, Jewish people around the world will fast for a full day in commemoration of the destruction of the temples that once stood in Jerusalem. Tradition teaches that the Temple fell in the year 70 CE on account of sinat chinam, the baseless hatred among Jews. The complete arrogance and disrespect shown by some Jewish people toward others in Israel demonstrates that 2,000 years later the lesson has yet to be learned.