Skip to the content
I couldn’t resist making this movie spoof poster with Mel Gibson and Delmon Young: 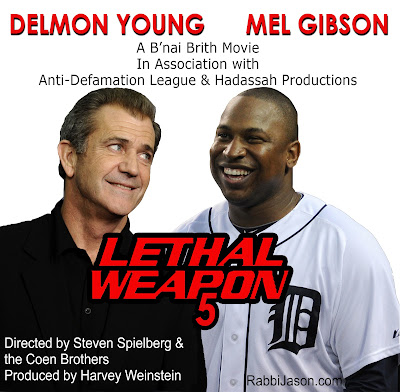 Mel Gibson’s name was brought up repeatedly after the news broke about the Detroit Tigers’ outfielder Delmon Young getting arrested in Manhattan for second-degree aggravated harassment and uttering an anti-Semitic slur while he was intoxicated. Young has been given a 7-game suspension by Major League Baseball and also placed indefinitely on baseball’s restricted list.

More details have been released concerning the altercation. According to the NY Daily News, Delmon Young was arrested for “assaulting Jason Shank following his drunken anti-Semitic rant. According to police sources, Young began screaming the offensive remarks after a panhandler wearing a Star of David and a yarmulke approached him. Shank and three friends gave the man $20 outside the hotel, which ignited Young’s racist rhetoric.”

According to reports Shank, 32, and three of his friends were visiting Manhattan from Schaumberg, a Chicago suburb, for a weekend bachelor party. Delmon Young screamed “You bunch of f—— Jews!” and then got into a fight with Jason Shank on the sidewalk outside the hotel. Young was released from jail after posting $5,000 bail after his arraignment for an aggravated harassment charge that was classified as a hate crime. According to his LinkedIn page, Shank is an international consultant for Trident Worldwide in Missouri and a regional manager for Taggart International, a company with offices in Wood Dale and Missouri. Both companies specialize in importing and exporting. Neither Shank or his bachelor party friends are Jewish.

In 2006, Delmon Young was suspended for 50 games without pay while playing for a minor league team after he threw his baseball bat at an umpire who called him out after three strikes.

Ironically, Delmon Young’s agent is Arn Tellem of the Wasserman Media Group. Tellem, a 1979 graduate of the University of Michigan Law School is Jewish. I’m not sure if Daniel J. Ollen, Young’s criminal attorney in New York, is Jewish but that would be ironic as well.

Tomorrow morning, I’ll be talking about the Delmon Young situation live on the Mojo in the Morning radio show on Channel 95.5 here in Detroit. The show will be broadcast live from a kosher pizza parlor and bagel shop in Oak Park, a suburb just outside of Detroit.

UPDATE:
Here’s the radio podcast from the Mojo in the Morning show: