I was disappointed a few months ago when I received the letter in the mail alerting me that my subscription to Condé Nast Portfolio magazine would be discontinued because the publication had gone bankrupt. But, rest assured, the letter informed me of my consolation prize: a subscription to Details Magazine.

To this day, I’m not sure how Details (a tabloid for the metrosexual?) is a suitable substitute for Portfolio (a source for “serious business journalism”), but anyway.

When the first issue of Details arrived in my mailbox with Adam Lampert, the odd-looking, American Idol guy on the cover, I placed the magazine directly in the recycling bin. I actually hadn’t heard of Adam Lampert (or his music) when the magazine arrived (I think I’m the only one who doesn’t watch American Idol). 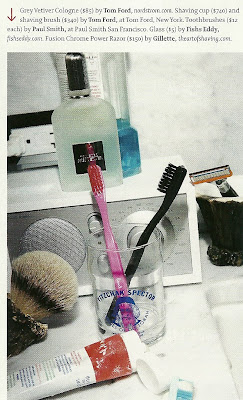 When the next issue arrived with John Mayer on the cover, I figured I’d give it another shot since I’ve enjoyed his music for about a decade now. Before I even got to the John Mayer article, two items in the magazine jumped out at me.

One was this photo (click to enlarge) of what is apparently a metrosexual’s bathroom sink counter on which he seems to keep his toothbrushes (pink and black, so maybe his and hers?) in a “Heroes of the Torah” drinking glass.

I’m not sure what is odder: the fact that there exists a set of glasses devoted to the heroes of Torah commentary or the fact that one of these glasses is being used as a fashionable(?) holder of oral hygiene products. It was generous of Details to inform its readership that one can procure the “Heroes of the Torah” drinking glasses at Fishs Eddy, where Torah Heroes shot glasses and coasters may be purchased as well (including one bearing the face of the great 19th century Rabbi Hildesheimer, who’s name is misspelled on the drinking glass).

But the “Heroes of the Torah” toothbrush holder wasn’t the first thing that grabbed my attention and immediately made me question this magazine’s devotion to all-things-Jewish. It was the photo of the headless model wrapped in the Israeli flag directing readers to the article about “the rise of the hot Jewish girl” complete with the “Rise of the Hebrew Hottie Timeline,” dating back to Queen Esther, Betty Boop, and Barbra Streisand.

The article, which carries the headline (and I couldn’t make this up), “Naughty Shul Girls – Red-blooded American goys have found their new fetish: the smoking-hot Jewess,” could certainly be considered modern day Antisemitism. The only thing I learned from the article was that Emmanuelle Chriqui, the actress from “Entourage” and “Don’t Mess with the Zohan,” comes from a Sephardic Orthodox family.

What I was left wondering was this: Why is Details magazine trying to compete with Heeb over Jewish satire. Oh, and also: Why was Portfolio the Condé Nast magazine that went bankrupt?