I once heard Rabbi Abraham Twersky tell a beautiful story that I found inspiring. As a young child, the rabbi explained, his mother would light one extra Shabbat candle for each child in the family. As his parents welcomed a new baby into the home, they would add another Shabbat candle. Rabbi Twersky recognized how warm it felt to know that there was more light in his home on Shabbat simply because he was alive. Certainly, his parents felt that the world was a little brighter because of their son, but this was a tangible way for him to embrace his importance and appreciation.

Similarly, on Hanukkah, many families participate in the tradition that each member of the household lights his or her own hanukkiyah. It is a way for each family member to contribute to the brightness of the Festival of Lights. Lighting the Hanukkah candles reminds us of the miracle told about the small cruse of oil that lasted for eight days in the Temple. When we each light the Hanukkah candles, we help keep this important story alive. Indeed, it is a story that is so much a part of our Jewish history and heritage.

There is something beautiful about the increased flames that illuminate from the Hanukkah lights on each successive night of the festival. A famous debate took place in Talmudic times concerning the order in which the Hanukkah lights should be kindled. The school of Shammai claimed that on the first night, eight lights are lit and then they are gradually reduced by one each night. The school of Hillel disagreed, arguing that on the first night one light is lit, and thereafter, the number is increased. Hillel explained that as we increase the light, we increase the holiness in the world. Of course, we follow the opinion of the school of Hillel. 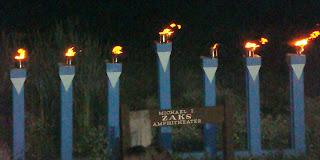 The story of the Hillel/Shammai debate reminds me of the last night at the summer camp where I serve as rabbi and was once a camper. Once darkness has fallen on the lake, a torch is illuminated to kindle the large seven-branched menorah created by the late Irving Berg, long-time Artist-in-Residence of Tamarack Camps. The first candle is lit by the most senior staff members who “graduated” from their camper years in the late 1980s. The second candle is lit by those staff members who “graduated” in the 1990s and so on until last summer’s class of former campers approach the menorah en masse, arm-in-arm, to light their first candle as camp alumni helping the menorah to burn brighter. With each successive candle of the menorah, the holiness and joy of our camp community is increased. The burning flames remind us that our history is rich with the commitment of so many people at camp and within our extended community. We are reminded that camp is our heritage. And it is a warm and bright feeling.

During this Festival of Lights, occurring in the darkest season of the year, let us reflect on the brightness of our world. Let us remember that the world is a little brighter because we are alive. If we all keep that in mind, we will also remember to look for the miracles in our own time.