Skip to the content
I’m a big Detroit Tigers fan and have always been interested in Jewish baseball players in the Major Leagues. Therefore, the soon-to-be made announcement that the Detroit Tigers will hire Brad Ausmus to be their next manager is exciting news. Ausmus, who is Jewish and once played for the Detroit Tigers, is currently the manager for Israel’s World Baseball Classic team.

Brad Ausmus was born in New Haven, Connecticut to a Jewish mother and Protestant father, who is a retired professor of European history. Of course, one of the first questions people ask about Jewish Major League Baseball players is whether they play on Yom Kippur. Like most Jewish professional baseball players, Ausmus has a mixed record of Yom Kippur play. He did not play on Yom Kippur in 2001. At the time, he was quoted in a collection of quotes by Peter Gammons in Sports Illustrated in a section titled “Everybody needs a little sanctuary” as saying he did play on Yom Kippur explaining that he “was trying to atone for my poor first half [of the season].” 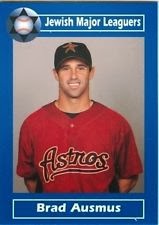 While Brad Ausmus’ mother is Jewish, he was not raised with the Jewish religion, but according to one interview he occasionally would celebrate the High Holidays with her and her side of the family. Like other notable Jewish players in baseball — like Ryan Braun or Shawn Green — while Ausmus didn’t grow up in a Jewish way, he came to embrace it as his popularity grew and as he became identified as a Jewish player. In a 2009 interview with the Jewish Journal, Ausmus explained, “I wasn’t raised with the Jewish religion, so in that sense I don’t really have much feeling toward it… But, however, in the last 10 or so years, I have had quite a few young Jewish boys who will tell me that I am their favorite player or they love watching me play or they feel like baseball is a good fit for them because it worked for me or it worked for Shawn Green or other Jewish players at the major league level. It has been a sense of pride. If you can have a positive impact on a kid, I’m all for it.”

Personally, I think this was the smart choice for the Detroit Tigers. Although Ausmus doesn’t have managerial experience in the Major Leagues, he has demonstrated his baseball knowledge in other positions including as the manager of the World Baseball Classic Israel team. I hope he’ll become involved in the local Detroit Jewish community while he’s here as manager, but even more important than that I hope he’ll do what Jim Leyland wasn’t quite able to do… take the Detroit Tigers to the World Series and actually win the championship for the first time since 1984. Good luck Brad Ausmus and Go Tigers!

UPDATED: I wasn’t sure if the local sports media would mention that Brad Ausmus is Jewish, but Lynn Henning of the Detroit News did. In his column, he wrote, “[Ausmus] is also Jewish, which will stoke a sense of kinship between Ausmus and the Tigers’ deep Jewish audience. In that context, there has been something of a void in the Tigers’ profile dating to the end of Hank Greenberg’s hallowed years in Detroit.”