A few years ago I was on my way to pick up my son from the Jewish Community Center, where he was in day care. Just a mile from the JCC I had to pull over to allow fire engines and police cars pass. I didn’t think too much of the blaring sirens and flashing lights until I realized they were headed for the JCC. When I arrived at my destination a police officer wouldn’t allow me to enter the parking lot. “But my son is inside and I need to get him,” I pleaded. I asked the officer what was happening, but he wouldn’t tell me.

Was it a bomb threat? Had there been an accident? Was anyone hurt? After a short while I learned that an old television set had been left outside on the sidewalk and it was mysterious enough to call the authorities. Once there was an “all clear,” I was allowed to enter and noticed how calm it was inside. No one in my son’s school had even known that the building was on lock-down. Thankfully, nothing happened. I was able to pick up my son who I obviously hugged a little tighter that day.

As I drove away with my child, I was thankful for his safety and immediately considered that this is how Israelis live on a daily basis. The minor ulcer I had as I thought the worst is a more typical feeling for parents in Israel. While things had been relatively calm in Israel for a while, that all changed with yesterday’s terrorist attack that killed nine in Eilat, the southern resort town, and today as thirty rockets struck Israel headed for the port cities of Ashkelon and Ashdod.

What I had experienced was a random event that lasted for only a few minutes and turned out to be nothing. But in Israel there is a certain normalcy to such events.

This Shabbat, we read Parashat Ekev, which contains the command to give thanks to God for the food we eat. V’achalta v’savata u’verachta — “When you have eaten your fill, give thanks to the Lord your God.” The Kotzker Rebbe taught that saying the Birkat Hamazon (Grace After Meals) is the fundamental mitzvah in that all of us are capable to feel grateful that the earth produced food for us to eat. Reciting Birkat Hamazon, like reciting a blessing before the meal, elevates the activity of eating from simply a physical routine into the realm of the sacred. But it also connects us to the Land of Israel — the Jewish homeland. The land that we are thanking God for in the blessings is the land of Israel. 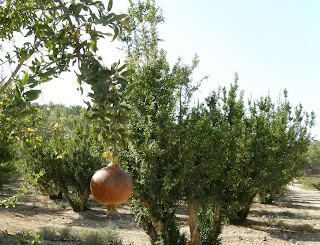 Just last week, we observed Tisha B’Av, the Jewish people’s national day of mourning. Like reciting Birkat Hamazon after meals, the somber memorial day forces us to feel a connection with Israel. Tisha B’Av is not a day for only Israelis to grieve because the destroyed Temples were located in Israel. It is a day for all Jews to grieve because the Temples were our holy temples and they were on our land in Israel.

When we thank God for our food by thanking God for the land, let us remember which land we are referring to. And when we mourn for the destruction of the temples, let us remember how we are connected to the land on which those temples stood. It is through the land of Israel that the Jewish people throughout the world are connected. And through our connection to the land, we are connected to the people in Israel who are being attacked by terrorists yet again.

Today, it is incumbent upon all Jews to stand with Israel. We must support the men, women and children who are living on the same land we refer to when we thank God for the food we eat. Am Yisrael Chai.