Since commenting here about how the assassination attempt of Arizona Rep. Gabrielle Giffords has brought the “Who Is a Jew” debate back into the spotlight, I have had some really intriguing conversations with colleagues about how we define Jewish status. A number of colleagues, including Rabbi Irwin Kula, Rabbi Kerry Olitzky, Rabbi Alana Suskin, and Rabbi Sue Fendrick, posted comments and contributed to the discussion on this blog. A Reform colleague and I have had an ongoing private discussion about patrilineal descent. She told me that some Reform rabbis are questioning whether Gabby Giffords would even be considered Jewish according to the Reform movement’s definition (there’s been no mention of her Jewish education or upbringing which would be required by the Reform movement’s policy on Patrilineal Descent).

My rabbinical school classmate, Rabbi Micah Kelber, noticed that the “Who Is a Jew” debate has even made its way into the sports world. Watching ESPN’s “First Take,” Kelber caught commentator Skip Bayless putting his foot in his mouth while referencing how Judaism defines Jewish status through lineage. He blogged about at Jewcy.com:

Today Skip Bayless of ESPN’s First Take made a tiny, but amusing mistake while debating whether it is appropriate to call Blake Griffin of the Los Angeles Clippers the first great white star because while his father is black, his mother is white. To support his argument, he appealed to the Jews for help in determining someone’s identity.

His slip of the tongue: “I would just like to point out that in some cultures, like in the Jewish culture, if the mom is white, you’re Jewish.” 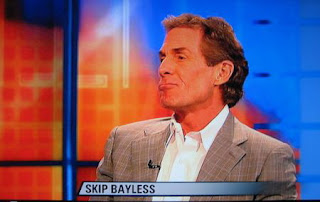 I don’t think that’s what he meant or else there’d be a whole lot more Jewish people in the world. I never thought the question of Jewish status would be taken up on ESPN. Maybe it’s better if it didn’t. In fact, maybe it’s better if we all moved on to other subjects now.