The LA Times Babylon & Beyond blog reported on Sunday that Apple has reunified Jerusalem.

Has Steve Jobs become a United Nations peacekeeper? Did Apple release a new app that unites the holy city of Jerusalem during these tense times? Maybe you thought Jerusalem had already been reunified several decades ago. 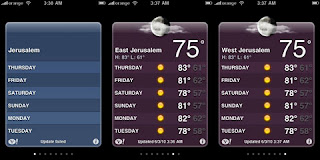 Edmund Sanders reports from Jerusalem for the LA Times:

Right-leaning Israeli politicians like to refer to Jerusalem as their “undivided capital.” But iPhone users here and around the world found recently that the storied, disputed city had been split in two.

In the smart phone’s weather application, the listing for “Jerusalem” disappeared earlier this month and was replaced by “West Jerusalem” and “East Jerusalem.”

Both Israelis, who dominate the west part of the city, and Palestinians, the majority in the east, claim Jerusalem as their capital. Israel annexed East Jerusalem after the 1967 Middle East War, though Palestinians (and most of the international community) never accepted it.

The debate over how, or whether, to divide Jerusalem is still one of the thorniest issues in Mideast peace talks.

Perhaps frustrated with the lack of progress in the peace process, iPhone engineers apparently decided to impose their own mini-version of a two-state solution by partitioning the city and, in essence, forcing users to pick sides.

A similar change took place on Yahoo’s weather site, which gave users the option of checking the temperature in “Jerusalem, West Bank, Palestine” or “Jerusalem, Israel.”

Reaction was mixed. A few Israelis and Palestinians got a kick out of the option, even though temperature information and other data were identical for East and West Jerusalem.

But many Israelis, here and in the U.S., took deep offense and accused Apple, the company that makes the iPhone, of “political propaganda.”

Well, it turns out that both Apple and Yahoo reversed their political decision and reunified Jerusalem.