FaceGlat, the ultra-Orthodox social networking site, is an attempt to offer Haredi Jews the experience of Facebook without all the immodesty. From the opening page it reminds one of public restrooms with a sign for men to enter through one door and women to enter through their own door. FaceGlat’s name is a mashup of Facebook and glatt, the term for kosher meat considered to be a higher standard of kosher because of the source animal’s smooth lungs. The site lets users do most of the same things they can do on Facebook (post photos, set up groups, create events, and post status updates), but it filters out objectionable language and keeps the sexes totally separate. 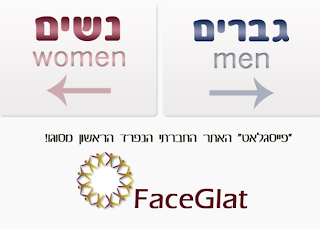 Of course it’s not Facebook, with its billion dollar, advertising revenue stream, and 800 million accounts. There are also flaws in its attempt to keep the site totally modest. For one thing, there’s not much to keep a woman from setting up an account in the men’s section or vice versa. In terms of the language controls, users can figure out creative ways to express themselves with abusive language (alternative spellings and a few special characters from the top of the keyboard can be helpful in that regard). Apparently, there’s also no way to keep users from posting the same indiscreet photos that prompted the creation of FaceGlat in the first place. Eric Mack, reviewing the FaceGlat site for CNews, was surprised when he signed on to find a thumbnail of a mostly naked, tattooed young man with a Latino surname on his list of suggested possible friends. So, it looks like FaceGlat isn’t as pure and holy as it set out to be.

Keeping those who don’t abide by the strict modesty rules of FaceGlat off the site is no longer the site administrator’s first priority. Hackers have become more dangerous to FaceGlat than immodest people setting up user accounts. For the second time this week, pro-Palestinian protesters have hacked into the FaceGlat site and changed the homepage to read “Free Palestine” in the colors of Palestine. 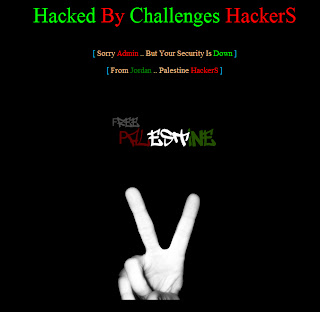 FaceGat was able to regain control of its site yesterday, but the hackers have struck again. This time they’ve chosen a romantic Arabic love song with a dance beat to begin playing when the FaceGlat site is accessed. The hackers signed their handiwork as “Hacked By Challenges HackerS” with a message to the administrators of the site: “[ Sorry Admin .. But Your Security Is Down ] [ From Jordan .. Palestine HackerS ].”

The bottom of the hacked website has a message for FaceGlat: “[ This Website Has Been Hacked By Challenges-HackerS| PaLeSTiNe – HaCKeRs | , If I Can Change The Domain i will do my best but i cant , so i will just put this index here , and to tell the owner of this site that am gonna get his pc soon or later , palestine is the best of the best , we will never stop hacking , Until you stop killing our brothers and sisters and mothers in palestine , the day is coming ] . : : Challenges-HackerS : : . | | ~#~ Ml7s Hacker ~#~ DrZero Hacker ~#~ Sn!peR Hacker.”

If FaceGlat intends to maintain a modest social networking site for its ultra-Orthodox adherents it will need to invest in some strong website security. While the site was never intended to be political or especially pro-Israel, these pro-Palestinian hackers from Jordan seem adamant to use FaceGlat to post their own status update.