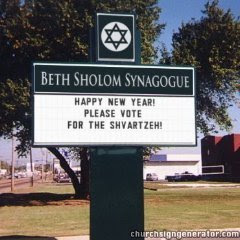 A congregant came up to me during a break in services on Yom Kippur to ask if I’d seen the picture being widely emailed of a synagogue marquee that instructed congregants to vote for Barack Obama. She explained that the sign said “Happy New Year! Please vote for the shvartzeh!”

I could sense that she was conflicted about this since she was an Obama supporter but also took offense to the Yiddish term used to denote black people which can be used derogatorily.

If you’re received a photo of a sign for “Beth Sholom Synagogue” and wondered where this synagogue is, the answer is: it isn’t.

The sign isn’t located anywhere in the real world. It’s a fake photo created with software on this website. There are blank church sign templates which allow people to enter whatever they like for the name of the church (or synagogue, or mosque, or what have you) and for the message on the sign board, and it creates a fairly realistic photo of a church sign with their input.

Someone used the site to create that sign and then they chose to e-mail it to a lot of Jewish people on Rosh Hashanah. I’m sorry you received it, but I’m afraid there’s not much I can do about it.

Please feel free to contact me if you have any questions, but again, there’s little I can do. I can’t control what people type into the form on the site, and I can’t control what people e-mail to each other. It’s literally impossible to filter every offensive word or phrase that someone can enter, without restricting use of the site for people who use it legitimately.

Update: several people have written in saying that they weren’t offended and that they thought it was funny, and that I shouldn’t worry. I hope I haven’t given the impression that I’ve been deluged with complaints; most of the “complaints” were just people wondering where this Beth Sholom was and why they would put up a sign like that. A couple of people found the message demeaning or disrespectful, and I can certainly understand why they would feel that way. For what it’s worth, I personally wasn’t offended (it’s not impossible to offend me, but it is pretty difficult), but I do think that it was in poor taste and could easily be taken badly, especially given the timing.