A few years ago, it looked like Fidel Castro was going to make his grand exit from the land of the living. Instead, early this summer he emerged from his medically induced hiatus. Since his return, Castro has apparently been reading The Atlantic because he contacted Jeffrey Goldberg, a reporter at the magazine recently.

While Goldberg was on vacation a couple weeks ago, the head of the Cuban Interest Section in Washington (what would be the Cuban embassy if we had diplomatic relations with Cuba) called Goldberg’s cellphone with a message from Fidel Castro. He invited him to Havana to discuss Goldberg’s article on Iran and Israel. 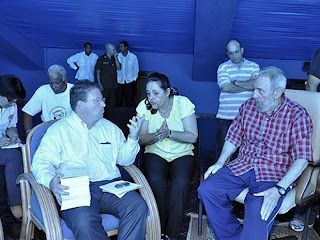 Fidel told Goldberg that his article in The Atlantic confirmed “his view that Israel and America were moving precipitously and gratuitously toward confrontation with Iran.” Fidel “criticized Ahmadinejad for denying the Holocaust and explained why the Iranian government would better serve the cause of peace by acknowledging the ‘unique’ history of anti-Semitism and trying to understand why Israelis fear for their existence.”

Goldberg’s reflections on his face-to-face meeting with Castro is fascinating. Perhaps, if he’s feeling up to it, Castro should be brokering peace between the Palestinians and Israelis.