I thought something smelled fishy when I received an email from fellow blogger Esther Kustanowitz today. Indeed it was. I was hopeful that the skilled writer had sent me a well-crafted sermon that I could simply deliver on Rosh Hashanah morning, but instead it was only an email to inform me that her friend Asael Kahana of K/Logic had created an interactive Rosh Hashanah card that is a mashup between Gefilte fish and Space Invaders. 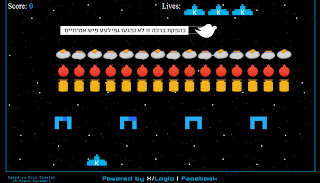 Yep, a mashup of Gefilte fish and the video game Space Invaders. I know, I know. You’re thinking the same thing I was thinking when I received Esther’s email. “How has it taken this long to create an interactive game that so seemlessly integrates the odd poached fish mince staple food of Jewish holidays with the Japanese arcade game created in 1978?”

Gefilte fish gets a bad rap, but is considered integral to many Ashkenazi Jewish holiday celebrations. If you’ve always hated this particular format of pureed and cooked fish, now a leading creative online marketing agency in Israel brings you your chance to shoot it down from the skies in an engaging, interactive card/video game – a mashup of the traditional mashed-up fish and the classic video game Space Invaders. Presenting…Gefilte Invaders! (You can play on the K/Logic site or below!).

“I have always had a Gefilte Fetish,” Asael Kahana, K/Logic’s creative director said. “There is something so iconic about this dish’s presentation and look. Same with the classic Space Invaders game that is a cult classic still today. I combined both because I thought that Gefilte fish may have a long tradition, yet people would really rather shoot it than eat it. The result was a great reminder of tradition and classics in an engaging interactive card for our customers.”

I admit it was fun playing this Gefilte fish version of Space Invaders and it was a wonderful procrastination from preparing for the holiday. Not to mention, I got all nostalgic as I thought back to my childhood in the early 80s popping quarters into the Space Invaders arcade game. Nevertheless, I’m still not convinced Esther sent me that email to publicize her friend’s creative Rosh Hashanah card or even to simply wish me a “Shanah Tovah!” I really think she just wanted me to visit her blog where she used the opportunity of her friend’s Geflte Invaders to tell the following joke:

When contemplating the fish populations of the ocean, how can one identify the Gefilte fish? [pause for effect]

-It’s the one with the carrot on its head”

On second thought, maybe it was Esther’s joke that smelled fishy.