Skip to the content
Like every other rabbi around the world I am currently hard at work on my sermons for Rosh Hashanah and Yom Kippur. I’ve always enjoyed writing and public speaking, so this exercise is enjoyable rather than stressful for me. However, finding the right words to inspire the congregation during this time of year can be challenging. The basic themes of the holiday haven’t changed in thousands of years: forgiveness, relationships, being charitable, and trying to become better people.

To what extent should sermons draw on the issues of the day? I’ve always tried to bring references to pop culture into my sermons, but I have traditionally shied away from getting into politics. Dennis Prager, a political pundit who moonlights as a High Holiday sermonizer, recently published an Op-Ed in the Jewish Journal of LA in which he rails against rabbis who preach about politics on the High Holy Days. Prager claims that every year around this time listeners of his show write him to complain that their rabbis delivered sermons which included political messages. As a conservative pundit, Prager is certain to include that “Invariably, there are two constants: The rabbi is non-Orthodox, and the sermons are left wing.” 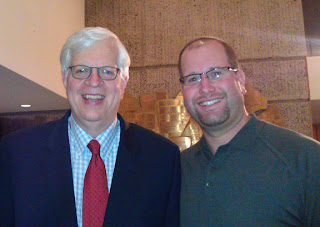 What Prager doesn’t like is when liberal rabbis include their opinion about social issues such as the recent health-care bill, for example, and frame it in the context of social justice and tikkun olam. It’s not that rabbis aren’t entitled to their opinions on these significant issues, but Prager takes exception when the rabbis use the pulpit to frame these political issues as Jewish imperatives. I happen to agree. Let me explain.

I believe that rabbis should use the pulpit to teach Torah. Teaching that we have an ethical responsibility to care for the health of all human beings is an important message and one that is appropriate to be included in a sermon. However, moving that conversation into the realm of politics by endorsing a bill under discussion in Congress is not appropriate.

Personally, I steer away from politics when I deliver sermons. I remember as a rabbinical student I was heading to Houston as a guest speaker at a large synagogue. The Torah portion for that Shabbat was Yitro, the narrative of Moses’ father-in-law offering good counsel to him and thereby improving his leadership. I had the idea to talk about other political consultants and “right-hand-men” who weren’t the leader, but made themselves indispensable to the leader because of their trustworthy advice. I planned to talk about the importance of the Cabinet to presidents and focus on two figures who were known for their good counsel, Henry Kissinger and Colin Powell. One of my teachers at the Seminary convinced me to not focus on these individuals because it could be too politically divisive to the congregation. The Democrats in the synagogue would focus on the Republican credentials of these two presidential advisers and not on my message, he reasoned. Reluctantly, I agreed to leave out these famous Secretaries of State lest my sermon be perceived as having a political message.

There are times when my own congregants will encourage me to speak about a political issue they endorse, but I respectfully decline. I’m not a politician and I’m not a political commentator. My role is use the words of the Torah and the Jewish Tradition to teach and to inspire. I remember a story my teacher Rabbi Burt Visotzky told my class at the Jewish Theological Seminary. The late NY Times columnist William Safire’s rabbi asked him why he didn’t come to shul anymore to which Safire explained, “I don’t need to come to shul to hear what Bill Safire wrote in the Times.” In other words, we rabbis should allow the political pundits to be pundits and we should use the High Holidays to inspire and encourage repentance.

Prager isn’t the only one publicly railing against rabbis using their High Holiday pulpits to push a political agenda. In the Wall Street Journal, Tevi Troy explained that each year leading up to Rosh Hashanah the Obama Administration feeds political talking points to rabbis through its annual conference call. I’ve participated in these conference calls in the past and it is true that their purpose it to provide the Administration’s position on various issues in case rabbis choose to address them in sermons. Troy points out that in 2009, President Obama “invited a group of 1,000 rabbis to discuss his health-care plan and then preach about it afterward.” I was a participant on that call and the President did in fact encourage us to speak about his health-care plan. I chose not to call in this year because I knew I wouldn’t be talking about President Obama’s jobs bill or the declaration of Palestinian statehood at the United Nations.

Neither of those topics will inspire my congregants on Rosh Hashanah. If anyone wants my opinion, I’m happy to discuss it privately in the form of a discussion. However, I don’t think it’s appropriate for me to use the holiday or my pulpit to endorse or reject the President’s jobs bill. I do think it’s important to get the unemployed back to work and to help find better jobs for the underemployed. As a rabbi I try to do both.

One of my colleagues who disagrees with both Prager and Troy is Rabbi Jill Jacobs. I have tremendous respect for Rabbi Jacobs and have learned much from her over the years. She has contributed greatly to the field of social justice in general and workers’ rights in particular. Writing in the Huffington Post, Jacobs, who is now the executive director of Rabbis For Human Rights-North America, titled her response to Troy “The Torah Is Political. Rabbis Can Be, Too.” Jacobs writes:

As one of the rabbis whom Troy criticizes (albeit anonymously), I want to respond to his charges.

Troy references a recent phone call for rabbis, organized by the Religious Action Center of Reform Judaism and sponsored by the Central Conference of American Rabbis, the professional organization of Reform Rabbis, on which he and I were two of the five speakers. The call featured three experts on the current economic situation — Senator Sherrod Brown of Ohio, Ellen Nissenbaum of the Center on Budget and Policy Priorities and Troy himself. Rabbi David Saperstein, the Director of the RAC, offered homiletic advice for speaking about contentious issues, and I presented texts that might guide sermons and teaching sessions about the economy. (Troy and I have this in common: He was the political conservative on the call, and I was the Conservative rabbi.)

Troy writes, “When I suggested that we separate politics from spirituality, a third participant pushed back, saying ‘the Torah is a political document.’ A curious assertion in a crowd that would quickly denounce any invocation of the Bible in political discussions.”

I’m not sure I’d agree with Jacobs that the Torah is a political document per se. It has a vast amount to teach us about political issues. In fact, I can’t imagine a political issue that is not treated in the text of the Torah or Talmud. However, that doesn’t mean that rabbis should be speaking about divisive political issues in High Holiday sermons. Talking about how the economy has caused more middle-class families to struggle to make ends meet let alone pay for the Jewish day schools and Jewish summer camps is appropriate in a sermon, but dissecting the President’s jobs bill should be off limits. Encouraging congregants to travel to Israel, send their teens on Israel trips, and buy Israeli art is wonderful. However, getting into the political areas of Palestinian statehood at the U.N. and the policies of the Israeli government won’t make for inspirational sermons during the Days of Awe.

The bottom line is that we are spiritual leaders and not political pundits. I heard Dennis Prager speak on Saturday night before Selichot services. Recognizing he was there in a synagogue to address the congregation before the preliminary High Holiday prayers, he steered clear of any political messages. He is a political pundit in his day job, but he didn’t take use the pulpit to push a political agenda when it wouldn’t have been the right time.

And now it’s back to sermon writing.