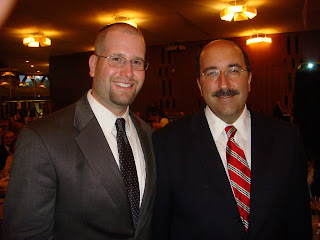 I first met Dore Gold, the former Israeli ambassador to the United Nations and foreign policy adviser to Bibi Netanyahu, a few years ago at a Jewish National Fund event. I was very impressed with what he had to say and how articulately he said it. Therefore, I was excited when I was invited to hear Ambassador Gold speak about the Goldstone Report this past week at a private lunch for local rabbis.

The Goldstone Report is the independent fact-finding mission created by the United Nations Human Rights Council and led by a South African jurist to investigate international human rights and humanitarian law violations related to the Gaza War. I had read several articles about the report and had seen Dore Gold debate Justice Richard Goldstone (video below), but was interested to ask him some questions about how Israel will respond to the report. Sure enough, at the luncheon arranged by AIPAC, Mr. Gold didn’t disappoint. He was able to translate the 575-page report full of legalese into easy-to-understand language. (Even he admitted that getting through the report in preparation for his debate against Justice Goldstein required much coffee and Advil.)

Ambassador Gold characterized the report as a way to de-legitimize Israel (the report says that the Israeli Defense Forces deliberately killed innocent Palestinians). He pointed out that the report doesn’t merely state that the IDF used excessive force or ignored the laws of proportionality, but that the Israeli Army intentionally targeted civilians (as part of its program). The report, he explains, attacks Israel’s very foundations. Some might be surprised that a Jewish judge (Goldstone) who has a daughter living in Israel would come to such conclusions. However, based on the history of the United Nations’ relationship with Israel over the past six decades, the report should not come as a shock.

Further, Gold points out that Hamas was using Palestinians as human shields and storing weaponry in the basements of schools during Operation Cast Lead. Contrary to what Goldstone reports, the IDF went above and beyond to warn the Palestinian civilians of impending attacks on locations where they knew weapons were being kept (leaflets were dropped and even phone call warnings were made to home and cell phones).

There will be debate among Israelis (and the world) as to how Israel should respond to the Goldstone Report. The New York Jewish Week interviewed Moshe Halbertal, co-author of the Israeli military code of ethics, who said that Israel’s refusal to conduct an independent, thorough probe of its military’s handling of last winter’s 22-day war against Hamas in Gaza as demanded by the United Nations is a “missed opportunity.”

The article stated that “Israel has said its Gaza incursion occurred in response to a nearly incessant barrage of rocket fire by Hamas terrorists in Gaza on Israeli civilians. It said the large number of Palestinian civilian casualties was because Hamas terrorists fought Israeli troops from civilian areas. Israeli media reported this week that Netanyahu, Defense Minister Ehud Barak and Israel Defense Forces Chief of Staff Gabi Ashkenazi favored a limited review of the war by a committee of senior Israeli jurists. They would be permitted to question political and military leaders, as well as Israeli military officials who investigated UN allegations of war crimes, but would be barred from interviewing officers and soldiers who took part in the war.”

Harvard professor Alan Dershowitz published a lengthy rebuttal of the Goldstone Report in the January 31st Jerusalem Post online issue in which he calls the report a “study in evidentiary bias” and refers to Goldstone as an “evil, evil man” and a traitor to the Jewish people.

However the Israeli government ultimately decides to respond to the Goldstone Report, after listening to Dore Gold discuss the inherent problems and factual errors of the report, I’m glad the Israeli prime minister is consulting with him. He really seems to understand what was underlying such a one-sided UN report. Here is the video of Dore Gold responding to Justice Goldstone at the Brandeis University debate: