Skip to the content
Happy Birthday to Adam Sandler, who turns 45 today. Sandler doesn’t always get the respect he should as a comedian, actor and writer but I’ve always been a fan. I recently watched “Funny People” for the second time and was left impressed with Sandler’s range as an actor. Billy Madison, Happy Gilmore, Waterboy and Big Daddy remain my go-to movies when some mindless humor is in order. 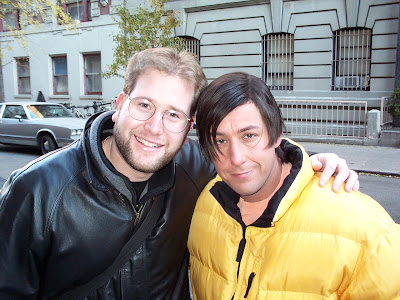 I had a chance to meet Adam Sandler in November, 1999 when he was filming “Little Nicky” on the Manhattan streets just around the corner from my apartment. Walking from 110th Street and Broadway up to the Jewish Theological Seminary at 122nd Street for morning minyan on a brisk November morning at 7:00 AM I did a double-take when I spotted Adam standing by himself on 112th Street trying to stay warm. We started talking. He told me about his brother who studied in a traditional yeshiva. After talking for about twenty minutes, he invited me to come back around lunch time to watch him shoot the movie.

There was a crowd of people trying to watch the filming when I returned to the set around noon with my rabbinical school classmate. Sandler recognized me and told his assistant to let us move up to the front so we could have a good view of the action. Over the next couple days I had the chance to be on a movie set (my first time) and shmooze with Adam Sandler between takes. On his final day of filming I presented him with a suede yarmulke with the Jewish Theological Seminary logo on it and we took a photo together.

For those who think that Adam Sandler’s only talent is making movies with sophomoric humor and silly voices, you should watch “Spanglish,” “Funny People” and “Reign Over Me.” Not only has he made some very good movies, he’s also educated people about Hanukkah with his series of Hanukkah songs and the animation “Eight Crazy Nights.” And not only did he try to solve the Israeli-Palestinian conflict with his humus-loving Zohan character, he donated 400 PlayStations to Israeli children whose homes were damaged in rocket attacks.