Jews aren’t sarcastic at all!

Okay, that was me being sarcastic, but the problem with the Jewish tradition of sarcasm is that it doesn’t translate well in Cyberspace where tone of speech doesn’t come through in text. That’s why it makes sense that the ability for computers to detect sarcastic speech has been developed in the Jewish homeland. 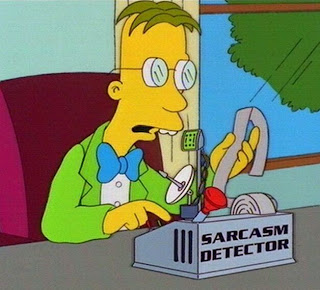 The sarcasm detection algorithm, developed by researches at the Israeli university, was heralded by the magazine for its accuracy.

Time’s Steven James Snyder wrote, “This is the most important software ever invented. Of course, if a computer using the Semi-Supervised Algorithm for Sarcasm Identification read that last sentence, it would immediately detect the sarcasm. Developed at the Hebrew University of Jerusalem, the tool is designed to spot sarcastic sentences in product reviews. The algorithm has been fairly accurate even in its earliest stages: in a trial involving 66,000 Amazon reviews, it was right 77% of the time, pointing to a future in which computers won’t just store your words, they’ll interpret your intent.”