One of my favorite movies as a kid was 1987′s “Stakeout” starring Richard Dreyfuss and Emilio Estevez. Watching the movie on VHS (remember those?) years later as a college student at around the same time I was discovering the writings of the Jewish theologian and civil rights activist Rabbi Abraham Joshua Heschel, I don’t recall ever thinking to myself, “You know, that Richard Dreyfuss is so good at playing Detective Chris Lecce in “Stakeout,” he’d do a fine job playing Heschel too.” 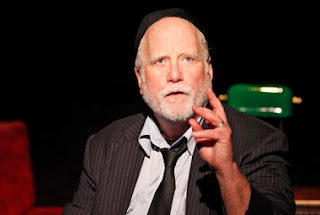 But, Dreyfuss has actually gotten rave reviews playing Rabbi Heschel in “Imagining Heschel” at the Cherry Lane Theater in New York. This, of course, isn’t the first time the actor played a teacher. After all, he played music teacher Mr. Glenn Holland in the 1995 film “Mr. Holland’s Opus.”