An article in All Facebook, the unofficial Facebook blog, reports that the Israel Defense Forces (IDF) has been using the social networking site to nab female Israelis who claim to be religious enough to be exempted from army service. Apparently, their activity on Facebook tells a different story — one the army is interested to learn. 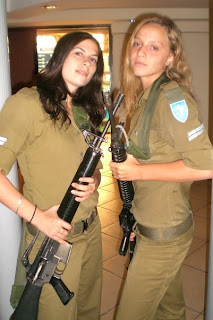 Here’s the full article about these women who probably never thought their Facebook account would would be stalked by the Israeli army. Does the army have a right to snoop around these women’s Facebook photo albums? Is this an infringement on their religious rights? Leave your opinion in the comments section.

The Israeli army is monitoring the Facebook profiles of female citizens in order to identify those who have falsely espoused religious beliefs in order to avoid conscription.

Brid.-Gen Amir Rogovsky of The Israeli Defense Forces said that the IDF currently has six offices tasked with investigating the religious claims of women who would otherwise be eligible for military service. Enlistment is mandatory for all Israeli citizens over 18. Current policy allows Israeli women to be exempt from the draft provided they sign a declaration that they are devoutly religious, adhere to Kosher standards, and do not travel on Shabbat.

But 1,000 women have been caught in violation of the law according Rogovsky, who cited examples of Facebook activity that lead to the charges against the women. One woman had uploaded a photo in which she was holding a menu from a non-kosher restaurant. Another woman had a photo wearing clothing which was deemed to be immodest. Yet another woman was caught because she had logged onto Facebook on the sabbath.

The IDF has employed even more aggressive tactics, entrapping women by creating Facebook events that take place on Friday nights, inviting women, and then charging those that respond “attending”. Once caught the women were brought back to service.

The IDF has seen a sharp increase in draft evasion in recent years. Rogovsky estimates that thousands of women who sign religious declarations exempting them from service are not practicing Jews.