Smoked salmon, or lox, has long been known as a staple fare at Sunday brunch in Jewish homes. In fact, Jewish people who claim their Jewish identity as only secular are known as “Bagels and Lox Jews.”

Well, now an ultra-Orthodox group of rabbis, the Chevra Mehadrin of Monsey, New York, have included lox on a list of food items that should no longer be considered kosher. According to these rabbis, a tiny parasitic worm called anisakis that can be found in smoked salmon calls its kosher status in question. 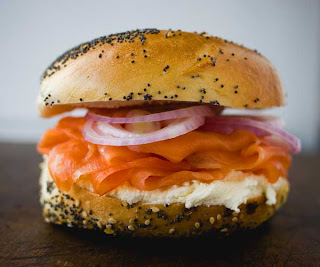 NBC New York interviewed some individuals in the Kosher industry who were less than appreciative for this ruling. “From time to time there are organizations who get a little crazy with these ideas,” said Hal Simon, manager of Ben’s Kosher Delicatessen in midtown Manhattan, who sells lox daily.

When matters like this arise in the world of kosher certification, I usually consult two of my Talmud teachers from the Jewish Theological Seminary for their opinions. However, based on many prior conversations with them I can pretty much guess what their responses will be. Rabbi Joel Roth, who is the highly regarded kashrut expert for the Conservative Movement will say this is narishkeit (foolishness in Yiddish). Prof. David Kraemer, author of Jewish Eating and Identity Through the Ages, will no doubt have a lot of eye rolling commentary about this latest pronouncement by the ultra-Orthodox kosher police.

In his book about kashrut and Jewish eating as an identity, Prof. Kraemer devoted his entire last chapter to this particular subject. Titled “Bugs in the System,” he opens the chapter by recounting the New York Times article from June 1, 2004, which reported that New York City drinking water had ceased to be kosher because of millimeter-long zooplankton called copepods.  He writes, “How is that water that had been drunk for generations without hesitation or compunction was all of a sudden suspect, and even ‘non-kosher?’ Examined by itself, this chapter in the development of modern kashrut practices is a study in different interpretations of detailed legal sources. But studied in context, the copepod incident is the culmination of a not-so-long history of increasing alarm and accusation over kashrut in the Orthodox community and beyond.”

Indeed, Kraemer goes on to address the relatively new (mid-1980’s) preoccupation the Orthodox have with the potential for bugs rendering vegetables as un-kosher. A year ago, I was interviewed by a Detroit Jewish News reporter for an article she was writing on my kosher certification business, Kosher Michigan. Due to pressure from Detroit’s Orthodox kosher certification group (the Vaad), the article was never published. However, when I asked the reporter what the Vaad’s representative said when she interviewed him, she replied that he didn’t question my knowledge of kashrut law; but suspected that, as a Conservative rabbi and mashgiach (kosher supervisor), I wouldn’t find it necessary to check the vegetables for bugs.

I have no doubt that Kraemer would have included the recent proclamation that lox are no longer kosher in this chapter. It is further evidence of the ultra-Orthodox blurrying the kosher regulations and prioritizing the wrong message. What I find ironic about this is the ultra-Orthodox’s reliance upon new technology to apply further strictures upon the already nuanced system of kashrut. Modern scientific knowlege could be applied by them to reverse the centuries-old ban in the Ashkenazic Jewish world on kitniyot (legumes) including peanuts during Passover, which Kraemer also addresses in the same chapter (“Of course, if Rabbi Moshe Feinstein approved of the kashrut of peanut oil on Passover, there is no question that it is kosher.”). Rather than use new information and scientific innovation to make it easier for Jews to observe the kosher laws, the ultra-Orthodox have used microscopes to render tap water, Brussels sprouts, and smoked salmon unfit for consumption by the kosher observant Jew.

And therein lies the reason that the most common questions I field in the months leading up to Passover all have to do with the acceptability of food items deriving from leguminous plants that techically cannot be chametz (leavened) as they are not derived from the “five grains” (wheat, spelt, barley, oats, or rye).

So, from now on when a secular Jew cites their love of eating lox as their Jewish identity, will you have the heart to let them know that those lox aren’t even kosher anymore?