I am no scholar on Anne Frank, but I do know one thing. A professional football player who hides out in his agent’s home so the pesky media can’t interview him is no Anne Frank.

In an interview with Sports Illustrated, former NFL player Tiki Barber described how he had to go into hiding as media scrutiny grew on him in April 2010 following his separation with his wife. Even though Barber joined his agent, Mark Lepselter, in the attic of his agent’s house, it’s still not even close to appropriate to make such a comparison. 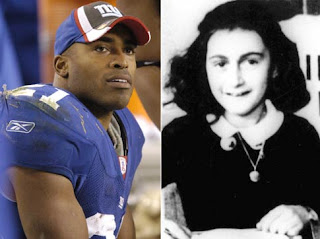 Apparently, Barber felt that his agent was playing the role of the kind Dutch people who helped Anne Frank and family hide from the Nazis in early 1940s Amsterdam. Barber explained to Sports Illustrated that “Lep’s Jewish and it was like a reverse Anne Frank thing.”

I’m quite certain that the Sports Illustrated columnist knew that Barber’s comparison would raise eyebrows. And somehow, Agent Lepselter has been defending his client’s ridiculous analogy.

Lepselter told ESPN, “In a world where nothing surprises me, where things get completely blown out of proportion, this only adds to the list. All Tiki was saying to (SI) was he was shedding light on going back to that time when he was literally trapped, so to speak, in my attic for a week. Nothing more, nothing less… Let me remind all those who want to make this more than it is: Tiki was a guest of (president) Shimon Peres in Israel five years ago.”

I’m curious to see if Tiki Barber will continue as an NFL commentator in the future of if this PR nightmare will mark the end of this TV career. If Barber decides to write about his poor choice of words in a diary, I certainly hope he will have learned his lesson and not compare himself to another famous diary writer.