I grew up watching the World Wrestling Federation (WWF) on TV. In fact, I even went to three WWF events including Wrestlemania 3 in 1987 at the Pontiac Silverdome. My two favorite wrestlers were Hulk Hogan and Randy Savage.

Randy Savage, who was known as “The Macho Man,” died in a car accident this morning in Florida. Randy’s brother, Lanny Poffo (also a former pro wrestler) told TMZ that Randy had a heart attack while driving and lost control of the car. 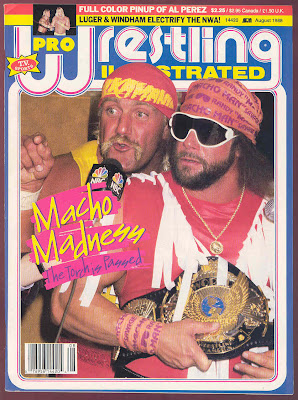 I remember thinking how cool it was that before Randy “Macho Man” Savage was a pro wrestler, he was a baseball player. Savage played minor league baseball as an outfielder for minor league teams of the St. Louis Cardinals, Cincinnati Reds and Chicago White Sox.

Savage, who remarried last year, was 58 when he died in the car accident this morning. Hulk Hogan said, “He had so much life in his eyes and in his spirit, I just pray that he’s happy and in a better place and we miss him.”