What’s the deal with Jimmy Kimmel and rabbis? This year alone, ABC’s late night talk show host has featured three rabbis (or almost rabbis) on his show. Kimmel used to date comedian Sarah Silverman whose sister Susan is a Reform rabbi living on a kibbutz in Israel.

Back in April, Yuri Foreman was a guest on Jimmy Kimmel Live!. The WBA super welterweight champion was introduced by Kimmel as a future rabbi who studies Talmud. The video of the future rabbi’s interview with Kimmel can be seen here.

Last week, Jimmy Kimmel explained the Hanukkah story to his millions of viewers and then showed the video of Chabad Rabbi Shlomo Cunin of California with Governor Arnold Schwarzenegger. Kimmel wished a “Happy first night of Hanukkah to our Jewish viewers. Tonight is the first night of eight nights of celebrating and misspelling hanukkah. Or maybe there is no correct way to spell it.” He even suggested that the Jewish holiday could be spelled Chaka Khan. The video is of Rabbi Shlomo Cunin and Governor Schwarzenegger at the 17th annual menorah lighting at the State Capitol in Sacramento.

Those rabbinic appearances seemed to go okay, but now Jimmy Kimmel is in some trouble for a video shtick he did in August. Kimmel is being sued by Rabbi Dovid Sandek, the flamboyant ultra-Orthodox rabbi who goes by the “Flying Rabbi” and whose YouTube videos have become popular. Rabbi Sondik claims his image was used without his consent when Kimmel used a YouTube video segment on the show that poked fun at basketball superstar LeBron James’ free agency decision this past summer.

Yahoo! News reports that, “According to a complaint filed in New York Supreme Court on December 10, Kimmel in August was trying to make a joke about reports that LeBron James had met with Rabbi Yishayahu Yosef Pinto for business advice. Kimmel claimed that he himself had met with Rabbi Pinto for advice and showed the audience a video of the exchange. The rabbi shown speaking to Kimmel appears to be Rabbi Sandek, not Rabbi Pinto.” 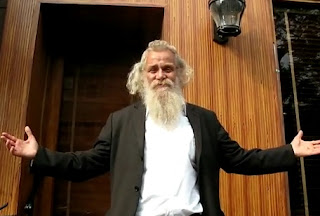 Sandek claims he was made to “look foolish” and presented as a “laughingstock.” While the late night show did get permission to use the TMZ owned footage of LeBron James with Rabbi Pinto, it never licensed the YouTube clips of Rabbi Sandek. Oops! Now the video of Jimmy Kimmel getting advice from the rabbi (Sandek) has been removed from the Web as the lawsuit is pending.