During the presidential race of 2000, an email was being sent around that showed a photo of Al Gore and his running mate Joe Lieberman. In large letters under their photo was the name “Gore.” And next to that photo was a photo of their opponent George W. Bush above the Yiddish word “Gornisht” (loosely translated as good for nothing). 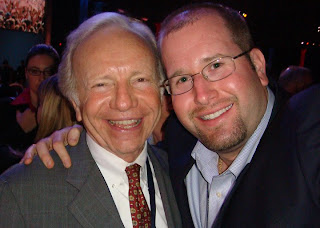 Much has changed since that dramatic election and many in the Jewish community would now label Lieberman as gornisht. For some, however, Lieberman’s energetic lead in championing the repeal of Don’t Ask Don’t Tell might catapult him back into the good graces of politically liberal Jews. Many news organizations noted that Lieberman, a Sabbath observant Jew, made some exceptions in order to help pass this legislation. JTA wrote, “A number of gay activists noted in blogs that Lieberman, an Orthodox Jew, thought the measure important enough to devote the Sabbath to shepherding it through.” And according to an article on the Daily Beast website, Andrew Sullivan, the gay Atlantic blogger who has championed repeal of DADT, dubbed Lieberman a “civil rights hero.”

Rabbi Steve Gutow, the president of the Jewish Council for Public Affairs, was quoted in a JTA.org article. He said, “With today’s vote, Americans may serve without being forced to choose between their commitment to our country and their integrity.”

A couple months ago, I was asked to respond to a question about DADT on the Jewish Values Online website. A Reform and Orthodox rabbi had already given their response and I was asked for my opinion as a Conservative rabbi. My answer was quoted on several websites including The Jewish Week. Now that DADT will be repealed it will be interesting to see how the Jewish community’s general feeling toward Joe Lieberman will shift.

Here is the Jewish Values Online question and my response:

QUESTION: What is the Jewish view on “don’t ask, don’t tell” and gays serving openly in the U.S. military?

RESPONSE: The U.S. military’s policy of “Don’t Ask Don’t Tell” might have actually been the best policy at the time. However, the level of public inclusion for the GLBT community in our country has changed since Don’t Ask Don’t Tell was instituted under President Clinton. Like other groups that have been treated unfairly in our country (Blacks, women, the handicapped, etc.), over time the public has changed its treatment and its laws.

Don’t Ask Don’t Tell was a “safe” way for the military to acknowledge that there were gays and lesbians in its ranks, but not to make too much “noise” about the situation. Today, in 2010, our nation is much more accepting of the GLBT community and I believe the military will follow suit.

From a Jewish perspective as well, GLBT inclusion has taken great strides in the past two decades. As a value, it is imperative that the military update its policy to allow gays and lesbians to be as honest with their comrades as they are with themselves.

Policies change over time. Our society, like our religion, is not stagnate — it is ever evolving. When I studied at the Conservative Movement’s academic institution, the Jewish Theological Seminary (JTS), out-of-the-closet gays and lesbians were not allowed to matriculate there. If a student came out as gay, they were asked to leave the school. I guess you could say that JTS operated like the U.S. military — Don’t Ask Don’t Tell. However, a ruling in December 2006 changed the Seminary’s position and granted admission to avowed gays and lesbians.