Skip to the content
It’s no secret that certain Jewish rituals have become mainstream. In her new book, “Kosher Nation,” Sue Fishkoff explains that kosher food isn’t only for Jewish people anymore. “More than 11.2 million Americans regularly buy kosher food, 13 percent of the adult consumer population,” she writes. “These are people who buy the products because they are kosher… There are about six million Jews in this country. Even if they all bought only kosher food, which is not the case, they would not be enough to sustain such growth. In fact, just 14 percent of consumers who regularly buy kosher food do so because they follow the rules of kashrut. That means at least 86 percent of the nation’s 11.2 million kosher consumers are not religious Jews.”

So, it is clear that there are millions of non-Jews out there who have gone kosher. And that is certainly not the only Jewish practice that has transcended Jewish borders.

I’m sure that at some point in history, if you were at a wedding and the crowd danced the “Horah,” you would be certain that it was a Jewish wedding. But not any more. The circle dance, in which the bride and groom are lifted in chairs in the middle of the circle, is no more Jewish than a bagel these days. Ami Eden, executive editor and publisher of the Jewish Telegraphic Agency (JTA), wrote an article the day before Chelsea Clinton’s famous wedding entitled “Will Chelsea Dance the Horah?” It was insignificant that Clinton married a Jewish man — likely, no matter whom she married, she would have danced the Horah at her wedding.

The next Jewish ritual that seems to have been adopted by non-Jews is the mezuzah. While the Horah is just a dance, placing the words of the “Shema Yisrael” on the door post of a home is actually a biblically mandated commandment in Judaism. However, as an article in the New York Times last month demonstrated, mezuzas are not only for Jews anymore. Ann Farmer wrote, “The doorways inside 30 Ocean Parkway, an Art Deco building in Windsor Terrace, Brooklyn, are studded with mezuzas of all sizes and styles: plastic, pewter, simple, gaudy, elegant. The people behind those doors are an assortment, too: Catholics, Baptists, Episcopalians, Buddhists, atheists and even a few observing the High Holy Days this week.”

Many of the gentiles with a mezuzah adorning their door posts didn’t affix the encased scrolls themselves, but decided to keep them hung after the previous Jewish tenants vacated the apartment. The article even mentions an 87-year-old Catholic woman who said she often wished she had inherited a mezuza like many of her non-Jewish neighbors did. The tradition recalled her youth, she said, when her local priest appeared each Easter to write “God bless this house” on her family’s front door. To her delight, one of her Jewish neighbors recently hung a mezuza on her doorway. “Every time I come home and remember, I kiss it and touch it and then I bless myself, saying, ‘In the name of the Father, the Son and the Holy Spirit, Amen.'” 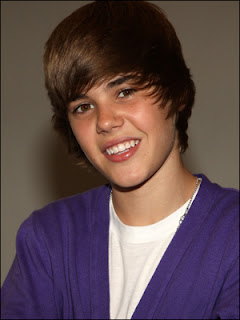 And that takes us to the teen pop sensation Justin Bieber. Though not Jewish, it appears that the young Mr. Bieber says the Shema Yisrael before each concert. Isrealli.org, the New Blog of Israel, reports that Scott “Scooter” Braun (otherwise known as Shmuel ben Eliezer), a 28-year-old born to a Conservative Jewish family in Connecticut with many relatives in Israel, discovered Justin Bieber on YouTube. Braun, now Bieber’s manager, told Adi Gold, the NY Bureau Chief for the Israeli newspaper “Yedioth Ahronot,” that “the thing that children from Israel will most want to hear: Justin prays the ‘Shema’ before each show. First he says a Christian prayer, then he says the Shema.”

Based on the number of concerts at which Justin Bieber performs, I’m guessing that he’s actually said the most important statement of Jewish belief many more times in his life than the average 16-year-old Jewish youth. There’s nothing wrong with non-Jews eating kosher food, dancing the Horah, putting mezzuzas on their doors, or saying the Shema. In fact, it only shows how Judaism continues to transcend borders in the 21st century.

It does lead me to wonder about the next “it” Jewish ritual that breaks into the mainstream. With the recent success of Sukkah City in New York, I wouldn’t be surprised if building sukkahs becomes the next  attractive Jewish ritual taken up by non-Jewish men who are handy, creative, and think it would be fun to build a temporary hut on their deck. I guess nothing really surprises me anymore.