The tragic death of Tyler Clementi, the Rutgers University student who took his own life after being filmed having sex with a man, has led some to voice concern over young people’s misuse of technology.

Rabbi Andy Bachman, the founder of BrooklynJews, wrote an open letter to young people in the community on his blog. The letter was reposted on the Forward’s Web site.

In his open letter, Bachman begins by reaching out as a rabbi to the young generation of his community be they gay or straight to let them know they were created in the image of God. He then goes on to address the use of technology to invade the privacy of Clementi and lead him to take his own life. 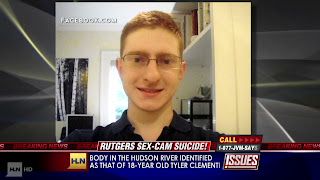 Bachman writes, “…[Clementi’s] peers, besides reflecting a disgusting prejudice, also worshiped their technology. Young people live in a world of too much access to too much instantaneous entertainment. And with a webcam and a laptop and an Internet connection, college students at Rutgers created their own bizarre “reality TV,” without thinking about the moral and ethical and criminal implications of what they were doing to another human being. A click and a laugh — and now someone with so much potential is dead. And that, plain and simple, is wrong. Technology can save lives but it can also be a tool for evil. So take stock next time you’re ready to click so quickly. Think and feel before you act.”

The NY Times reports that the news about Clementi’s suicide came on the same day that Rutgers kicked off a two-year, campuswide project to teach the importance of civility, with special attention to the use and abuse of new technology.

We are still learning how best to use these new technologies, from social networking to video streaming. The ability to broadcast realty television is now possible for millions of people with a camera and an Internet connection. The question is whether our society has the ethics necessary to guide us in the appropriate use of these media. As we see from the case of Tyler Clementi, the misuse of technology can be fatal.