Kevin Youkilis, a Jewish player on the Boston Red Sox, designed his own Major League Baseball t-shirt. While Youkilis wasn’t the only player to design his own t-shirt, he was the only one to include a Hebrew word on the front of the shirt.

The main design highlights his nickname “Dirt Dog” and the bottom part of the shirt says “L’Chaim,” the Jewish term meaning “To Life” which is used as “Cheers” before drinks. 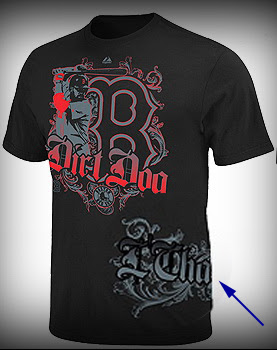