Kippah. Yarmulke. Beanie. Skullcap. You can call it whatever you want, but the Jewish head covering has been in the news and in pop culture a lot lately. 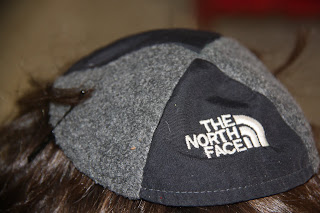 The New York Post reports that an Italian man is suing McKinsey & Co., the international consulting firm, claiming he was fired after repeatedly complaining to human resources that his colleagues made fun of his yarmulke. Ciro Rosselli claims in papers filed in Manhattan federal court yesterday that he wore a yarmulke in the McKinsey & Co. offices where he worked as an executive assistant and was discriminated against for it. I know there are several McKinsey & Co. employees who wear a yarmulke to work. Rosselli’s case is interesting, however, because he’s not even Jewish. He was wearing the Jewish head covering while practicing “theosophy,” an obscure spiritual philosophy that maintains that “there is no higher religion than truth.”

Rosselli’s colleagues at McKinsey & Co. gave him a hard time about his kippah. He claims his boss compared him to Madonna, the Kaballah-loving celebrity who has embraced Judaism despite the fact that she’s Christian. Another co-worker suggested that Rosselli was just trying “to hide his bald spot.” According to the lawsuit Rosselli filed, one co-worker said he wasn’t a “real Jew” and another demanded that he “take that [yarmulke] off! You’re creeping me out!” Rosselli’s lawsuit seeks unspecified money damages from McKinsey & Co. for discrimination and retaliation.

The kippah has also made its way into pop culture. It’s become more common to see actors wearing a yarmulke on television shows (Jeffrey Tambor on “Arrested Development” or Jeremy Priven on “Entourage) and in the movies (Ben Stiller in “Keeping the Faith” or Owen Wilson in “Meet the Parents”). But this is just to let the audience know they are playing Jewish characters. 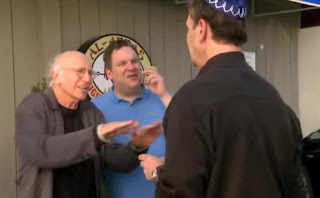 In a recent episode of “Curb Your Enthusiasm,” the kippah was the punchline. Like he did as a writer on “Seinfeld,” Larry David draws on real life situations for “Curb” and shows how humorous they are. I’m sure that living in Los Angeles, Larry David has encountered middle-aged Jewish people who suddenly embrace Jewish observance. And that was precisely the situation he wrote for Bob Einstein, who plays the dentist Marty Funkhowser on the show. In the “Palestinian Chicken” episode, Larry attends a dinner party where Funkhowser, wearing a yarmulke, explains that he’s recently undergone a spiritual awakening following his divorce and mid-life crisis. He has been meeting with a female rabbi each night who has influenced him to become more religious (saying the blessings before meals, wearing a kippah and even considering “Koufaxing” his friends by not playing in the golf tournament on Shabbat).

In this scene (video below), Funkhowser is about to enter a Palestinian chicken restaurant wearing his large velvet yarmulke, but Larry David and Jeff Garlin (playing Jeff Greene) won’t allow it.

I started wearing a yarmulke when I was four-years-old at my synagogue-based pre-school, and then continued to wear it at my Jewish day school in Detroit and whenever I was in a synagogue. During my freshman year of college I decided to wear a yarmulke all the time. At first I probably wore it as a sign of Jewish solidarity and then later for more religious reasons. Today, I cynically joke that I wear it simply to cover my bald spot, although truth be told it probably has protected my head from getting sunburned every now and then.

Leo Rosten claims that the word “yarmulke” comes from the Tatar word for skullcap. However, I think it’s more likely from the Aramaic “yira malka” meaning “awe of the king” as a sign of respect to God. Whatever one’s reason for wearing a yarmulke, they deserve to be treated with respect. Whether you’re an Italian New Yorker experimenting with many religions or a spiritually renewed Jewish dentist going to eat some Middle Eastern chicken.