I was interviewed by a reporter yesterday about this blog. He asked me how I decide what to write about. I explained that if it’s about a subject I’m interested in –like sports– and I can find a Jewish angle on the story, then I write about it. With some stories the Jewish angle is easier to find than with others, but when a pro basketball player hires a rabbi for spiritual guidance, well… not much skill is involved. 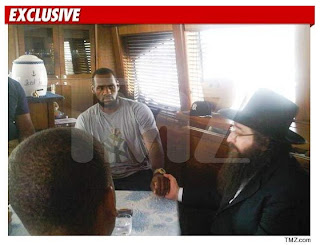 Perhaps I’m gaining a reputation for writing about Jewish connections to professional sports and athletes because in the past 24-hours when I didn’t have the opportunity to blog about LeBron James hiring Rabbi Yishayahu Yosef Pinto to consult him, I received no less than a dozen messages asking what I had to say on the matter.

TMZ, the Web’s main source for celebrity gossip, obtained the exclusive photo of LeBron James in a business meeting yesterday with Rabbi Pinto, who’s known as the “Rabbi to the Business Stars.”

LeBron has apparently hired Rabbi Pinto, at an alleged 6-figure salary, for spiritual guidance for a “big merchandising meeting” that took place on a private yacht somewhere off the coast of NY.

The best part of the story is that the 37-year-old Pinto only speaks Hebrew, which means King James may want a translator. Perhaps he’ll ask either Amar’e Stoudemire (who’s reportedly still in Israel leaning Hebrew) or Shaq (who wished a Shanah Tovah last week).

As for me, maybe someone like Larry Bird is hoping to stage an NBA comeback and wants to retain me as his Jewish spiritual guru. You just never know!