In Judaism the number 613 is a lucky number associated with the number of positive and negative commandments that can be found in the Written Torah (Bible). So, when LeBron James, Chris Bosh and Dwyane Wade line up to display their new Miami Heat jerseys, many Jews in the know can’t help but smile at the symbolic number.

Taryag is the acronym made up of the gematria (numerology) numbers that stand for 613. So, instead of the “Taryag Mitzvot,” here are the Taryag Heat. Now let’s see if these guys can play by the rules and win a championship. 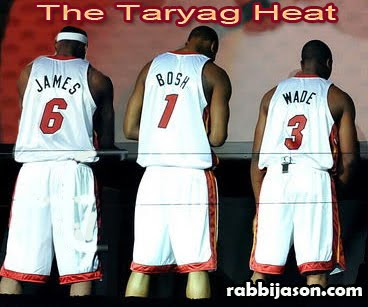