When it comes to Hanukkah there’s really only been one traditional way to play Dreidel. The four sided spinning top has four Hebrew letters on it. Each letter tells you what to do if it lands on that letter — you win, you get half, etc. It might be fun the first time you play, but after several years of playing Dreidel the old game gets boring.

Two new spins on the old Dreidel game have emerged. Eric Pavony founded Major League Dreidel, a pun infested contest to see who can spin the dreidel the longest. And card shark Jennie Rivlin Roberts came up with No Limit Texas Dreidel (NLTD). Instead of cards, players bet, raise or fold depending on the strength of their dreidel hand.

Both games are detailed in an article by Canada’s National Post (hat tip to Adam Masry). If you don’t appreciate a good pun, don’t read on.

Major League Dreidel (MLD) is an amped-up Hanukkah party and battle royale where players vie for the longest dreidel spin. As competitors with such names as Spindiana Jones, Goy Wonder and Spinona Ryder play with the traditional four-sided spinning top, the mid-twenties crowd shouts, high-fives and swigs such Jewish-themed beers as Genesis Ale and Messiah Bold. The league’s main venue, the infamous Brooklyn music hot spot the Knitting Factory, is located in the hipster haven of Williamsburg.

The Jewish puns are endless, as are the inventive costumes. Oscar De La Menorah, for example, sports a boxing robe and trunks in competition. Between bouts, the heavy metal act Gods of Fire play such songs as The Quest for the Latke Oil and Taking the Temple.

Eric Pavony, 31, is MLD’s founder and “knishioner.” “I remember enjoying spinning the dreidel more than actually participating in the traditional rules of the game,” says Panony, who has seen his league grow from 32 competitors to 120 since 2007.

This new take on dreidel spinning reminded me of the Heeb magazine cover from a few years ago featuring the Beastie Boys playing Dreidel. 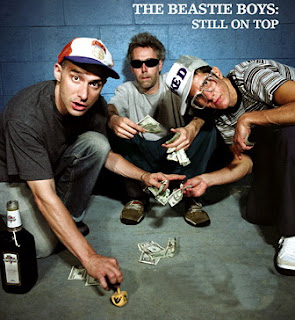 I’m glad to see people being creative and reinventing the staple game of the Hanukkah holiday. Happy Hanukkah!